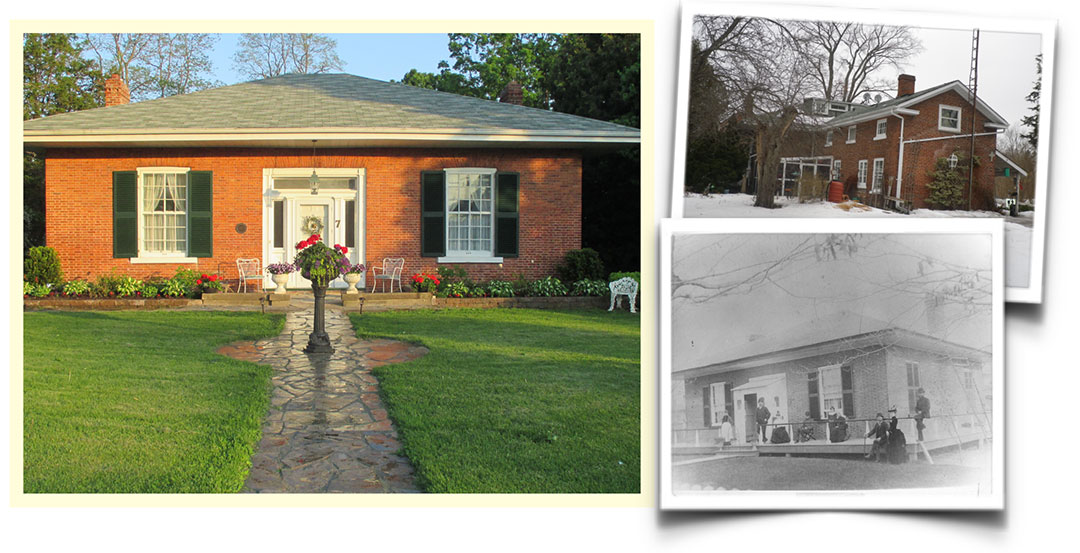 No. 7 King Street West in Colborne is a Regency Cottage with just a touch of the Georgian features that were already out of style in England by the time this cottage was built. This architectural style began in Europe, and was honed by the harsh necessities of Upper Canada and the skills and materials at hand.

Whatever style it is, this house has a fascinating secret – the low overhanging roof and square, simple facade belies the fact that there are five distinct levels: the full height basement with its massive fireplace and various servants’ rooms; the attic currently used as a sewing centre; the two story tail, one room wide, which houses the kitchen and dining area and the bedroom level above; and the main floor with its generous Georgian inspired rooms.

The house nestles into the garden of 1.2 acres, in a pleasing asymmetrical position. The large 12 over 12 windows, 4 ground level entrances with sidelights, and sheltered patio/room make the outdoors and indoors feel intimately connected and inseparable. The layout of the garden was planned and developed by Mrs. Elya Chestnut who lived in 7 King St. West from 1977 to 1987. It is evident from her gardening notes and blueprints that she had a firm grip on the principles of the Regency Style.

John Ogden (1762-?) (LINK) was the first owner of the 200 acres that make up Concession 1, Lot 32, the Lot lying south of what is now King Street West. These 200 acres are now bounded by Ontario Street on the west, Division Street on the east, King Street on the north, and the western part of the Ogden Point Quarry on south. Ogden was granted this property by the Crown on 11 March 1809.

The next Land Office record for the south side of King Street West was the sale on 17 January 1821 of the northern 90 acres of Concession 1, Lot 32 by Jane Hodges, George G. Kent, and Hannah Kent (LINK) to Festus Bennett (?-ca. 1851) (LINK). Unfortunately, the transfer of the land from Ogden to Hodges et al. was not recorded.

Cuthbert Cumming (1786-1870) was born in Tomintoul, Banffshire, Scotland and from his youth worked for the Northwest Company, a fur trading company based in Montreal and the primary competition for the Hudson Bay Company. He was a clerk at the Northwest Company post at Fort Dauphin, in the Swan River District of what is now southwestern Manitoba, starting at the age of about 18 in 1804. He was still there when the Northwest Company was subsumed into the Hudson Bay Company in 1821 and he continued working for the Hudson Bay Company thereafter. He became Chief Trader in 1827. In 1828 he was transferred to the Montreal Department, but didn’t like it. In 1832 he was sent to the Saint-Maurice region (near Trois Riviere, Quebec?). He apparently always wanted to return to the west, and after a leave he took in Britain in 1832 he was supposed to be posted to a western area but at the last minute he was shuffled to Mingan on the north shore of the Gulf of St. Lawrence. Finally in 1841 he was posted to Fort Pic on Lake Superior and he returned to the Swan River District (Fort Pelly) in 1843. He supposedly retired to Colborne in 1844. This is the year before he bought the property at 3 King Street West and two years before he bought 7 King Street West. Either 1844 is a bit inaccurate, or he lived somewhere else in Colborne briefly before buying the properties.

Cuthbert Cumming’s first wife was definitely an Indian, and it is possible that his second wife Jane was in part as well. There is a Manitoba government website that lists Jane as an “adopted and natural” daughter of Thomas McMurray (1776-1849) and Jane Cardinalle (ca. 1790-?). Jane Cardinalle is in turn also listed as the “adopted and natural” daughter of Joachim Cardinalle (?-?). It wouldn’t be at all surprising if Jane McMurray was at least a quarter Indian herself. But this is just supposition.

The property at 7 King Street West was inherited by Cumming’s wife Jane when he died in 1870 of “paralysis” (a stroke?). It then passed on to her only two surviving children James and George when she died in 1893. George in turn died in 1895, leaving the property solely to James.