The history of Colborne newspapers

The history of local newspapers begins in 1856, when Joseph Keeler III (Little Joe, who later became an MP) founded and published The Colborne Transcript. In it were published the minutes of early township and Colborne council meetings, social happenings, and local advertisements, as well as news of the world. The Transcript proclaimed its mission statement proudly upon page one of the first issue.

“The Colborne Transcript is published for the purpose of promoting the Local Interests and Improvements of Colborne, Castleton, Percy, Hastings and Norwood; the development of the great Natural Resources of the Townships adjacent; and devoted to AGRICULTURE, COMMERCE, STATISTICS, INTERNAL IMPROVEMENTS, GENERAL INTELLIGENCE, also furnishing the latest News, foreign and domestic, State of the Markets, &c.,&c.”

Soon after, in 1857, the Northumberland Pilot, published by John Steele (a Scottish immigrant who once lived at 3 King Street West, reputedly the oldest house still standing in the village) began its life. Mr. Steele was purportedly a friend of the Keelers.

John Steele was also involved with the Watchman newspaper as a vehicle to publish his political views, for such they were. Certainly Keeler, as an aspiring member of parliament, would have done the same.

The Colborne Independent started life in 1860; at that time there would have been three competing newspapers based in Colborne – the Transcript, Pilot and Independent. The publisher of the Independent was Wm. R. MacArthur.

The first issue of the Colborne Times came out the previous year, but we have been able to find no further information about this publication. 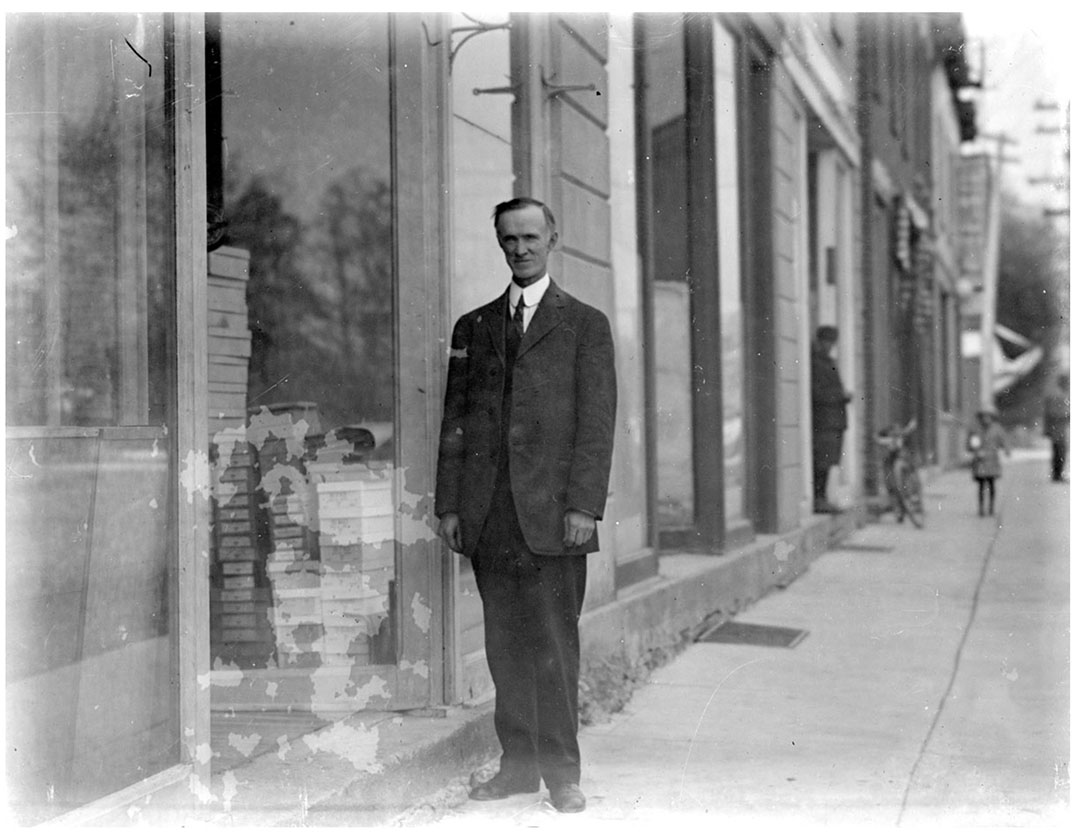 One of Colborne’s longest-lived newspapers was the Colborne Express, first published under the name The Express and Gazetteer, by George Keyes, circa 1865-1866. It was in continuous circulation for over 90 years. George passed it on to his son, Harry S. Keyes (above). Howard Free, an employee of the paper since 1911, took over ownership after Harry Keyes’ death, in January, 1944. Editor of the paper was his wife, Willena Keys (no relation to the Keyes family), and they ran the publication from the Colborne office, until the end of 1958. The Express office was located at 26 King Street East (south side of the road, in the downtown core –Carter Thomson Law office in 2019).

The Enterprise of East Northumberland – 1881

This newspaper was at one time published under the name Northumberland Enterprise. The earliest known copy was dated 1881. Apparently, the paper was more or less in a state of liquidation when Henry Gale (below) and his brother, James, who together ran the West Durham News in Bowmanville, come to look at the paper to see if it could be purchased and resurrected. Henry Gale made a downpayment of $500.00 on the paper and then took it over himself, about 1886. He moved to Colborne in 1888 and bought the house that still stands at 28 Toronto Street. 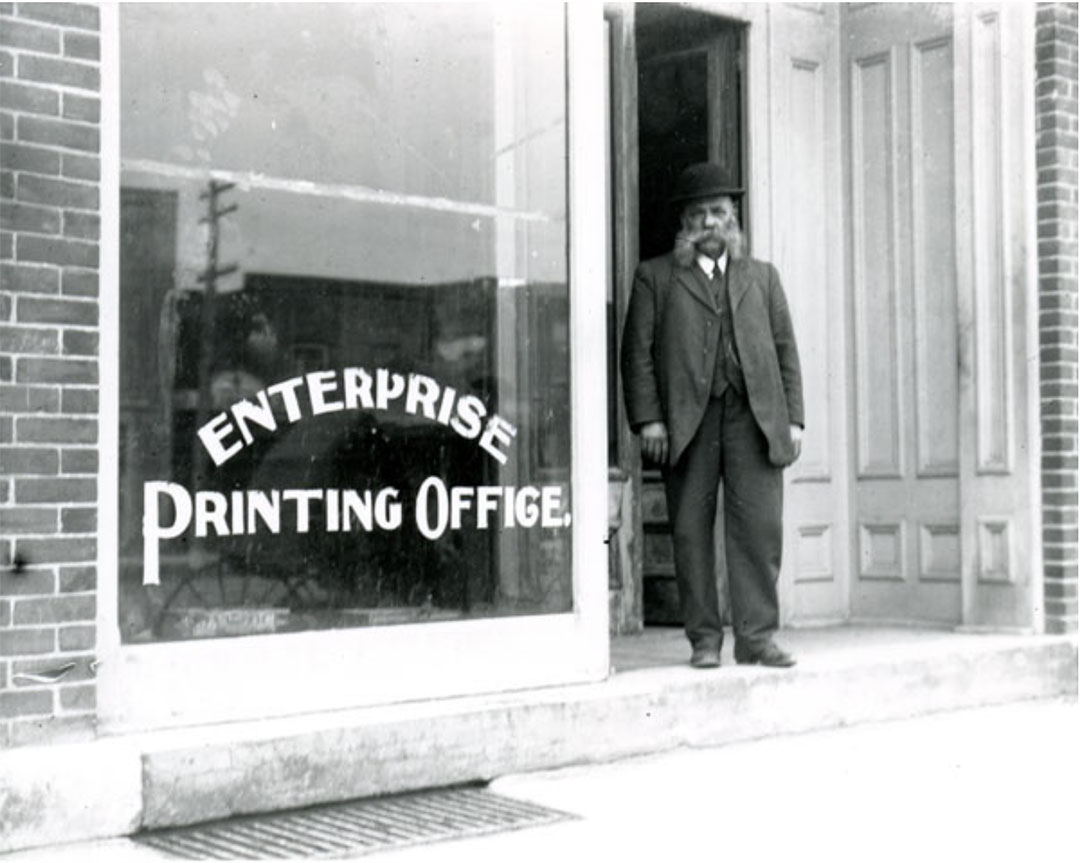 “At one time”, Arnold Warren, local historian, recalls “the press was run, quite literally by horse power. Mr. Gale would drive his horse and buggy to the office, park in the laneway behind, unhitch the horse and put it on a treadmill. The horse would walk on the treadmill, providing the power to run the press”. 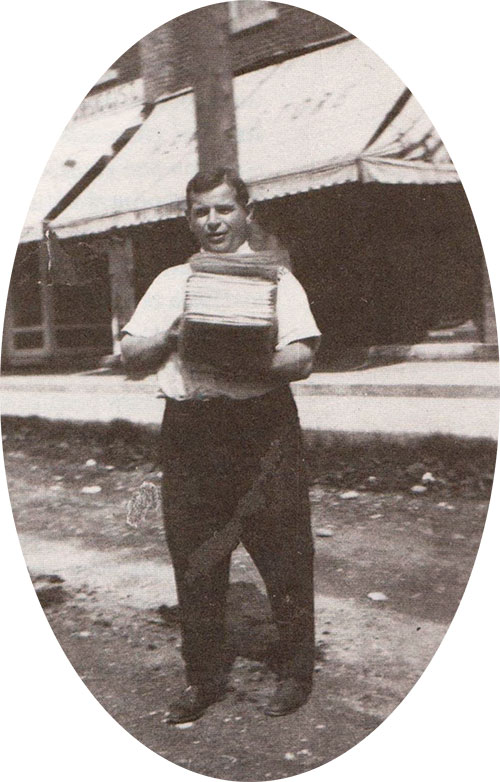 Henry’s son Hartley, who was always called “Pat,” (above) took over management of the Enterprise in the 1930s. The paper was published continuously by the Gale family, until the end of 1958 on the north side of King Street, about four shop-fronts east of the corner of Victoria Square. Pat Gale was a well-known banjo player and a man who loved a party. There were (and still are) many stories around Colborne regarding Pat Gale, the parties he had, and the jokes he loved to play. He used to invite school children in to see the press and ask them if they could see the minuscule “type lice” that supposedly lived among the tiny, metal letters. He would then laugh when they got so close as to get their noses blackened by the printer’s ink on the type. In 1958, the Enterprise and its competitor, the Express, were both purchased by General Printers Ltd., (The Times) of Oshawa.

The two papers were combined, and the first issue of the Colborne Chronicle hit the streets at the beginning of 1959. Early editions of the chronicle bore the crossed names of the Express and the Enterprise to signify its continuity with papers that had gone before. William T. Harrison was the first editor and publisher. Foster Russell, founder of Northumberland Publishers Ltd. and author of several local historical books, purchased the Chronicle in the early 1960s. Under his ownership, William G. “Bill” Self, a British-trained printer and onetime Dundonald-area farmer and former chief constable of Colborne, took over as editor and printer. The first office was situated at 33 King Street East (home of Barkin’ Bubbles dog wash in 2019). Bill Self worked for the paper again, from 1984-87, when Eileen Argyris (below) was editor. In the late 1960s Kaye and Les Cunliffe, who lived in the Salem area, (in 2000) undertook the editing and printing of the Chronicle. 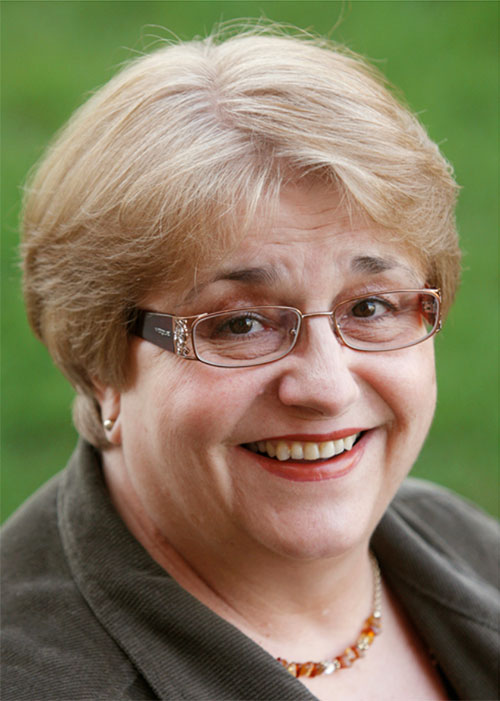 During their tenure, the Chronicle, along with the rest of the Northumberland Publishers chain of papers was purchased by publisher Dr. James Johnston. Johnston began printing the Chronicle in Cobourg at the offices of the Cobourg (Sentinel) Star, and for a time, it was included in the Star as a weekly supplement. In the meantime, Conolly Publishing (The Brighton Independent) bought out the Colborne Citizen, from 1973-1980. Conolly currently (year 2000) publishes The Independent, which has universal free circulation throughout eastern Northumberland County, including Colborne and Cramahe.

In October 1983, all the newspapers in the Northumberland Publishers chain, including the Chronicle, the Star, Port Hope Evening Guide, Newcastle Reporter, and Campbellford Herald, passed out of local ownership for the first time when James Johnston retired and they were sold to H. B. Burgoyne of the St. Catherine Standard. In the late spring of 1996, all the Burgoyne holdings, including the standard and three surviving Northumberland Publishers papers – the weekly Chronicle and the daily Star and Guide – were sold to Southam Inc. which shortly afterward became part of the international newspaper empire controlled by Conrad Black’s Hollinger Inc. The Chronicle’s editor at time of writing (year 2000) is Mandy Martin. The paper is sold by subscription and comes out once a week, on Thursday. The local office is located on King Street East, pre-print work is still done at the Cobourg Daily Star building and the paper is printed at The Trentonian in Trenton, another Hollinger holding. In 1997 the company also began producing the Apple Gazette, serving the Brighton area.

Each of Colborne’s newspapers, in its time, has served the surrounding township and immediate area, as well as the village of Colborne.

Update: In the year 2019, there is one remaining free newspaper (Brighton Independent) circulated in Colborne. There is no longer a publishing presence in the village.

Excerpted from
How Firm a Foundation
author: Eileen Argyris
and Cramahe Digital Archives