Elisha Bristol (1775-1859) was born in Wallingford, Connecticut, the son of Benjamin Bristol (1736-1808) and Sybil Perkins (1744-1794). He married Jane Vananberg (1780-1860) in about 1802. Alternative spellings have been found in genealogies for Jane’s last name: “Van Anberg”, “Vanamberg”, and “Vanamburgh”. Some genealogies cite Elisha’s wife as Jane McDonald, with the same birth and death dates, but most indicate that her name was a variation of Vananberg. No information about her parents has been found. 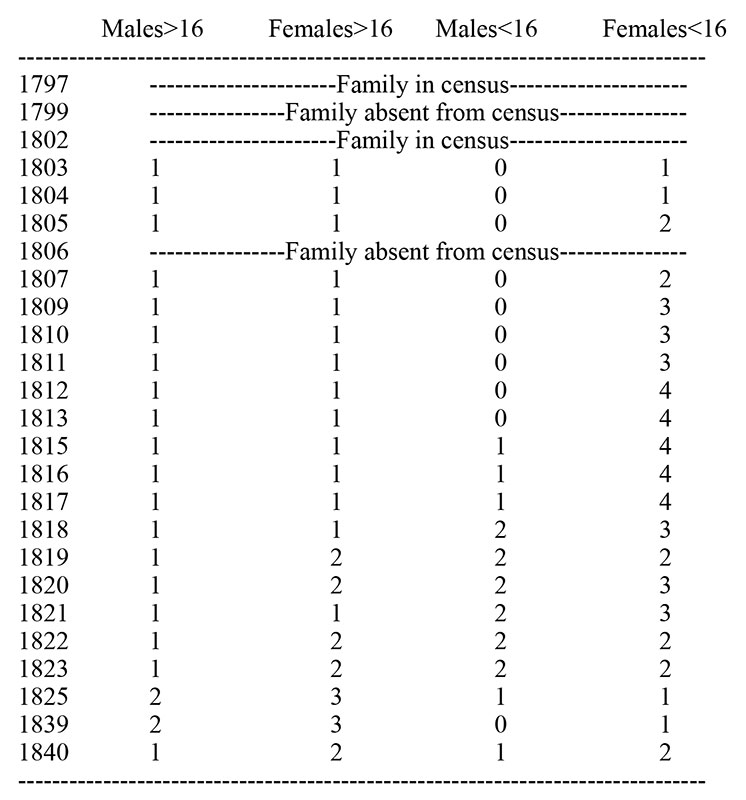 To summarize:
1797: Elisha Bristol was listed. Unfortunately, this “census is renowned for its inaccuracy as a list of actual residents in the Township. Significantly, Bristol was not listed in the more accurate 1799 census. He appeared again in 1802, and the 1842 census indicated that he had been a resident in the province for 40 years. It seems likely, therefore, that although he may have held property in Cramahe, he did not actually live there himself until after his marriage in 1802.

1803: The adults in this census were Elisha and his wife Jane. The girl was Nancy, supposedly born in 1802.

1805: Another daughter was added, presumably Hannah because the next daughter after Hannah, Jane, is cited in genealogies as not being born until 1806. However, Hannah is listed as having been born in 1803, so one would have thought she should have appeared in the 1804 census. Perhaps she was born in 1804-1805 instead of 1803?

1806: The Bristol family did not appear in the Cramahe Township list for this year. Daughter Jane is listed in genealogies as having been born in New York in 1806, so perhaps their absence from the Cramahe census that year is more than just a clerical error.

1807: The Bristol children still numbered two daughters, as in 1806. If Jane was born in 1806, this means that a daughter must have been lost before 1807. Since Nancy and Jane both lived to adulthood, it would seem that Hannah was the one who died. No reference to anything other than an 1803 birth has been seen for her.

1812: Yet another daughter was added. Genealogies list two as yet unaccounted-for daughters born before this date: Syble (b. 1810) and (Eleanor b. 1811). No further information has been found for either except that both are listed as having died in 1846. Are they the same person? If not, and if the counts in the table above are accurate, they couldn’t both have lived to 1846 and one of them must have died in infancy. Perhaps Syble, because if she was really born in 1810, she should have appeared in the 1811 census.

1815: Son Alfred (b. 1814) was added to the family. Four daughters (presumably Nancy, Jane, Delilah, and Eleanor) were still present.

1839: Fourteen years passed since the last available census. There was still an under-16 female listed but the youngest daughter of Elisha and Jane should have been about 19 that year, so this was apparently not her. One possible explanation is that this was a granddaughter. Alfred married in 1833 and had a daughter Delilah in 1834. This would suggest that the other male over 16 in the census was Alfred and one of the three females over 16 was his wife Mary Jane. The other two older females would then likely be Elisha’s wife Jane and their daughter Artsmetia. This is pretty circumstantial and may not be true. One hitch in this scenario is that Alfred and Mary Jane supposedly had another daughter, another Mary Jane, who should have been counted in 1839 because she was born in 1838. Possible explanations for this are: 1) the suggested scenario is wrong, 2) the genealogies are wrong about Mary Jane’s birthdate, 3) the counts for the 1839 census were actually taken in 1838, or 4) this is an error either in the census or in the transcription of the census into the version available to us.

1840: The theory that Alfred and his family were living with Elisha again almost, but not quite, fits. There are now two under-16 females. These might have been Alfred’s daughters Delilah and Mary Jane. There is also an under-16 male. Alfred had a son, John, supposedly born in 1841, which is close to the date of the census. But it doesn’t fit exactly. This again would require an error in the boy’s birthdate, the date on which the census counts were taken, or in transcription of the census. The over-16 male and one of the over-16 females would have been Elisha and Jane. There was only one older male, so if the idea is true that the children in this census were Alfred’s, he was not living with
them when it was taken. The second over-16 female would either have been Artsmetia or Alfred’s wife Mary Jane.

Elisha Bristol was included in the 1842 Cramahe census, but was absent from the census taken in 1851. The 1850 US census indicates that he and his wife had moved to Racine in southeastern Wisconsin by that date.

The only available reference to Elisha Bristol’s occupation is the 1842 census, which listed him as a farmer. The 1850 Wisconsin census listed his occupation as “none”, but he was 75 years old at the time and likely retired. He died in Racine in 1859.

Elisha was the only Bristol to have owned property in Cramahe Township; none of his children are listed in Land Office records. The 1797 census indicates that Elisha owned Lot 17 in Concession 5, but the land he was eventually granted by the Crown was Lot 17 in Concession 1. It is unclear whether Elisha owned land in Concession 5 in 1797, then later owned land in Concession 1, or whether the “5” in the 1797 census was in error. Each of these lots was 200 acres in size. Lot 17, Concession 1 had easy access from Lake Ontario and from the York (Toronto)-Kingston Road. Lot 17, Concession 5 would have been way back in the bush with no road access in 1797. The Concession 1 Grant wasn’t dated until 1817, only three months before Elisha sold the property to Matthew Goslee (1757-1830) in 1818, but since Elisha and family were in the Township from at latest 1802, he probably farmed it for years before it was officially granted to him. Lot 17 in Concession 5 was granted by the Crown to Abraham Winn (?-?) in 1807. Both Lots 17 are illustrated in the following figure. The base map illustrates the southern 2/3 of Cramahe Township. 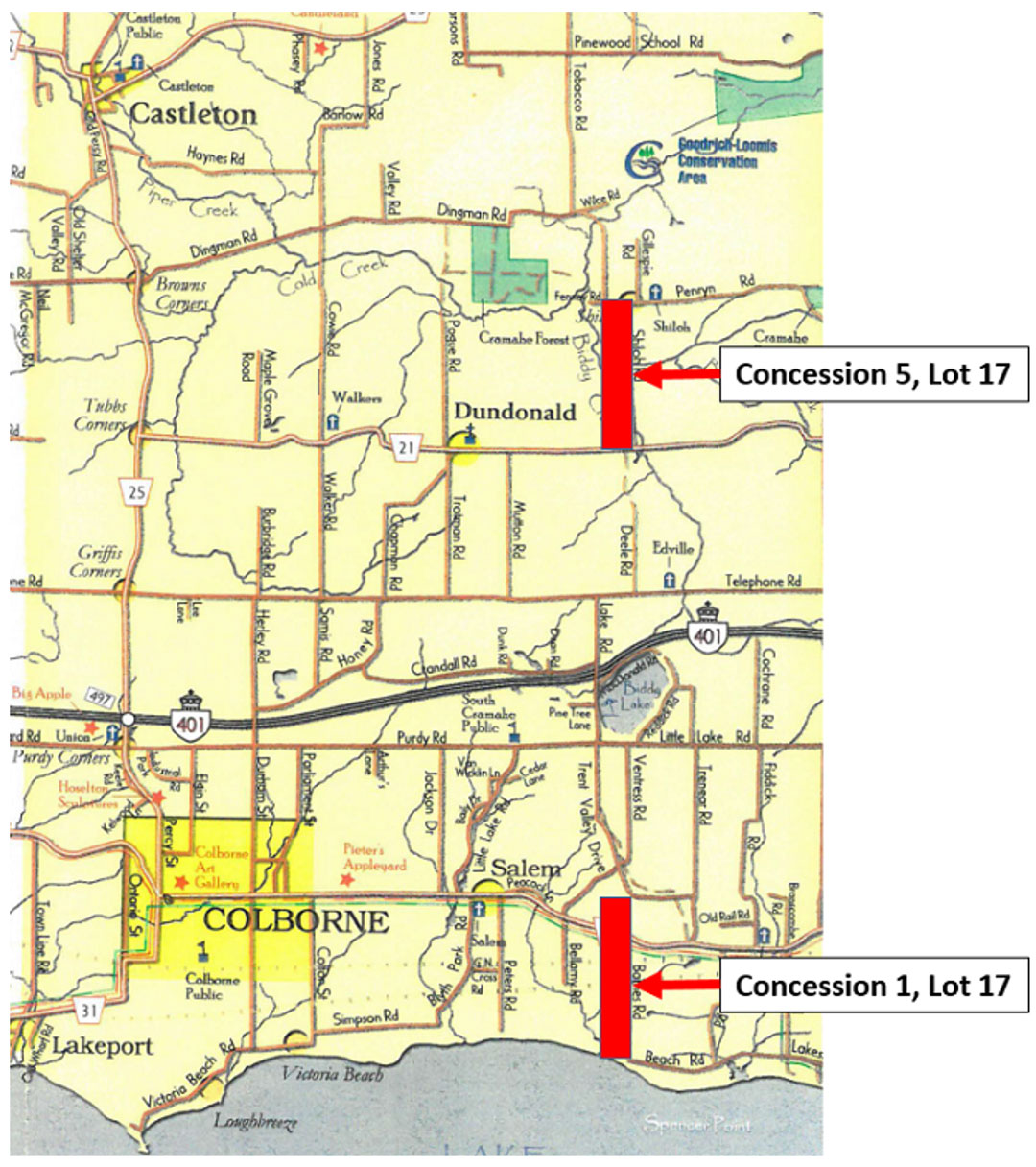 Children of Elisha and Jane Bristol

Nancy Ann Bristol (1802-1905).—Genealogies list Nancy’s 1802 birthplace as Brighton, Ontario, but neither the Township nor the town of Brighton existed at that time. As discussed above, Nancy apparently lived with her parents in Cramahe Township until her marriage to another first-generation Cramahe immigrant, Jacob Chatterson (1797-1867), in 1820. He owned property just northwest of the Bristols, across the York-Kingston highway in Lots 15 and 16 of Concession 2. Land Office records and the birth records of their children suggest that the Chattersons remained in Cramahe Township until about 1833 when they moved to Brighton. They remained in Brighton for the rest of their lives.
Hannah Bristol (1803-1806?).—No information is has been found about Hannah except that genealogies place her birth in 1803. If the analysis of early Cramahe censuses discussed above is correct, she may have died in about 1806.

Delilah Bristol (1808-?).—Delilah was born in 1808 and married Joseph Haley (1808-?), but no information is available as to when or where they were married. In fact, there is no further information about any aspect of Delilah’s life or death. Joseph was living as a widower with his son Stephen (ca. 1838-?) in Houghton County, Michigan in 1880. We can infer from this that Delilah was married before 1838, died before 1880, and had at least one child.

Syble Bristol (1810-ca. 1811?).—Genealogies list Syble (b. 1810) and Eleanor (b. 1811), who both reportedly died in 1846. The census counts discussed above suggest that after 1812 only one of them was present in the Bristol household. This either means that the death date cited for one of them is mistaken and she really died in childhood, or that Syble and Eleanor were actually the same person. If they were unique individuals, then Syble was more likely to have been the one that died young because, although she was supposedly born in 1810, she was not counted in the 1811 census.

Eleanor Bristol (1811-1846).—See the discussion under Syble Bristol, above. No other information has been seen, other than her birth and death years.

Nelson Levi Bristol (1818-1897).—Nelson married Esther Lenss (1814-1850) in 1839. Given the unusual surname and proximity of birth years, one would have thought that Esther was probably the sister of Alfred Bristol’s wife Mary Jane, but genealogies list Esther’s parents as an unknown Lenss and Jane Dunlop (?-?) and Mary Jane’s as Anthony Lenss (1783-1884) and Louise Cross (1788-1853). Nelson and Esther had five children, two born in Cramahe Township (Emily Jane [1840-1929] and James Edward [1841-1931]), a fourth born in Elgin, Illinois (William Henry [1846-1919]), and another born in Wisconsin (Nancy Ann [1848]). A sixth child (Mary Ann [1843-?]) is listed in genealogies without reference to birthplace. Elgin, Illinois is northwest of Chicago and about 80 km from Racine. This means Nelson and family moved to Racine, or at least the Racine area, in the early 1840’s, just like his parents, his brother Alfred, and his sister Jane (see above). Wisconsin censuses place Nelson and family in Racine in 1850 and 1855. Esther died in 1850 and married Matilda Van Doozer (1844-1880) in Kewaunee County, Wisconsin, at the southern end of Green Bay, in 1860. By 1870 the Nelson Bristols had moved a bit farther north on Green Bay to Door County, where Nelson remained for the rest of his life, dying of “old” age in 1897. Nelson and Matilda had another two children in Door County: Eleanor Jane (1861-1938) and Caroline Louise (1864-1951). Matilda Van Doozer was the daughter of William Van Doozer and Nelson’s sister Jane (see above). This means that Nelson married his niece.

Artsmetia Bristol (1820-1846).—No information has been found about Artsmetia other than that she was born in about 1820. Some genealogies list her death in 1846 while others cite it as “before 1846”. The census counts outlined above suggest that she was living with her parents through at least 1839.

The next generation of Cramahe Bristols were all small children when they left Canada. They all spent their adulthood in Wisconsin. These were Alfred’s children Delilah, Mary Jane, and John, and Nelson’s children Emily Jane and James Edward. Mary Jane married John Henry Lenss (1841-1909), her first cousin, and Emily Jane married Horace Van Doozer (1832-1912), her step-mother’s brother (i.e., her uncle by marriage).