The Fire of 1906. There are four photographs in the Cramahe Archives (Figures 1 and 4-6) that show the aftermath of a fire on the south side of King Street in 1906. The extent of this fire is described in a brief article that appeared in the Cobourg Sentinal-Star on 28 September 1906:

“Fire was discovered in the Hotel Bristol stables, Colborne, on Saturday night. W. J. Burleigh’s livery barns and contents, W. J. Burleigh’s dwelling, W. J. Burleigh’s block and stock hardware therein and household furniture belonging to Mordon and Co., and J. S. Yeoman’s livery barns. The fire went south along Division St., burning dwellings and barns owned by R. Snetsinger and occupied by C. W. Ramsay, a residence owned and occupied by Dr. Hewson and damaged a number of other blocks. The loss will be about $18,000, partly covered by insurance.”

From the point of view of 28 September 1906, the date of this article, the previous Saturday fell on 22 September. The “Sept 23·06” hand-written on all of these aftermath photographs is the date they were taken, not the date of the fire. The people mentioned in the Sentinal-Star article are Walter J. Burleigh (1863-?), John S. Yeomans (1858-1908), Robert Snetsinger (1856-1934), Charles W. M. Ramsay (1863- 1948), and Thomas B. Hewson (1872-?). Burleigh and Yeoman were liverymen. Snetsinger was a prominent Colborne business with his fingers in lots of pies; he owned much of the Keeler Block at one point. Ramsay was a tailor who apparently rented a house from Snetsinger. This would have been on the site of the modern 15 Division Street. Hewson was living in the house next door at what is now 17 Division Street. At the time it was owned by his father Thomas B. Hewson (1839-?); Hewson Jr. would purchase it in October 1906. No reference to “Mordon and Co.” has been found; the implication is that they rented furniture. Henry J. Morden (1869-1936), who appears in the 1911 Colborne census, may or may not be “Mordon”.

The fire started in the livery stable behind (south of) the buildings that line the south side of King Street. The only damage to reach King Street itself is illustrated in Figure 2. It involved only the property owned by Mr. Burleigh directly across from what is now Newman Oliver and McCarten Insurance. The property is now the site of the Cramahe Restaurant next to McGlennon Insurance. The building on the right in Figure 2 still exists, and its end wall looks exactly the same today (Figure 2) as it did in 1906. The building on the left housed the offices of Yeoman’s livery stable among other businesses (see Figure 3). It did not burn, although the associated barns behind it were lost in the fire. 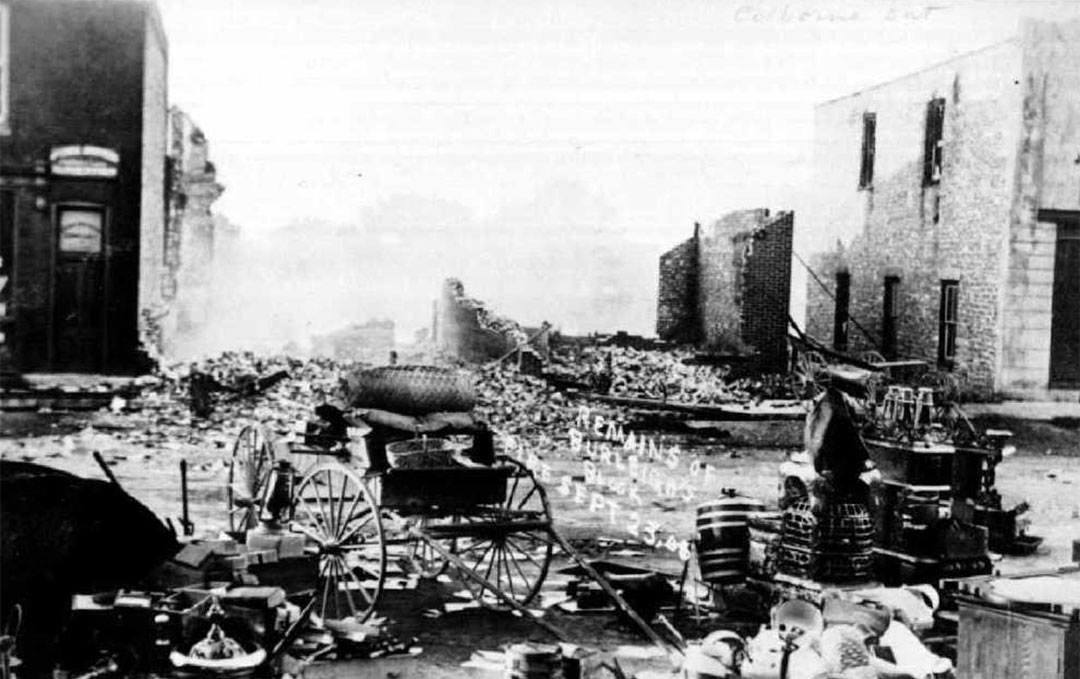 Figure 1. Property facing King Street destroyed by the fire of 1906 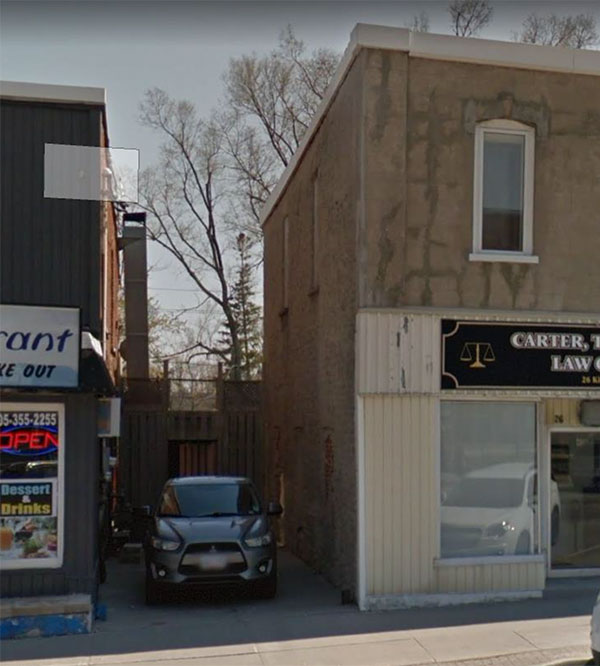 Figure 2. The eastern edge of the building on Lot 241E as it appears today. 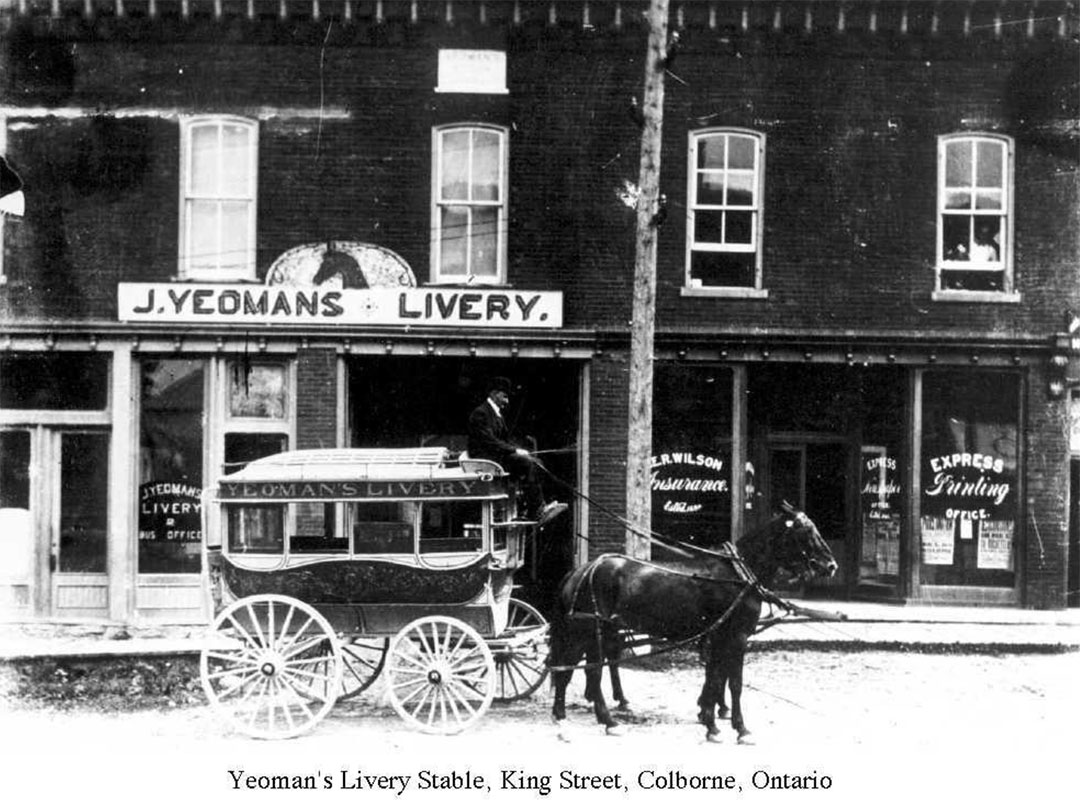 The burned livery stables behind the Burleigh and Yeomans buildings are shown in Figure 4. The camera was pointing east from a point behind what is now the Post Office across the burned ruins. Dr. Hewson’s (misspelled “Huson’s”) house can be seen in the background on the left side of the figure. This appears to be the shell of a rather larger structure than the house that is there now. Clearly the present house must have been built after the fire, over the razed ruins of the old one. In the background on the right are outbuildings behind some of the buildings that face on King Street. In the far distance is a building across Division Street. The next one moving forward, the pale building with three windows showing, is the structure that still stands, attached to the south side of the Queens (or Bristol as it was then) Hotel. The hotel itself is barely visible to the right of this building at the right edge of the photograph. The other two buildings have been replaced with more modern structures. 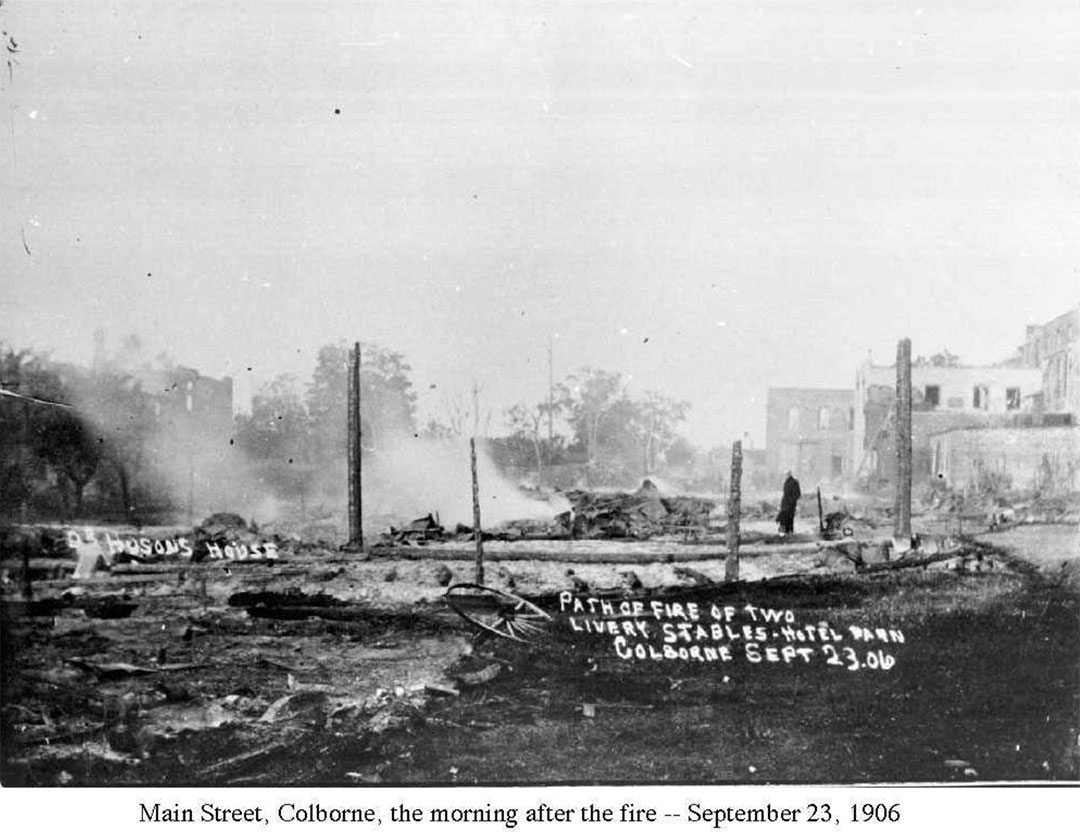 Figures 5 and 6 are images of the north side of King Street on the morning after the fire. The debris in the street has been saved/salvaged from the fire. 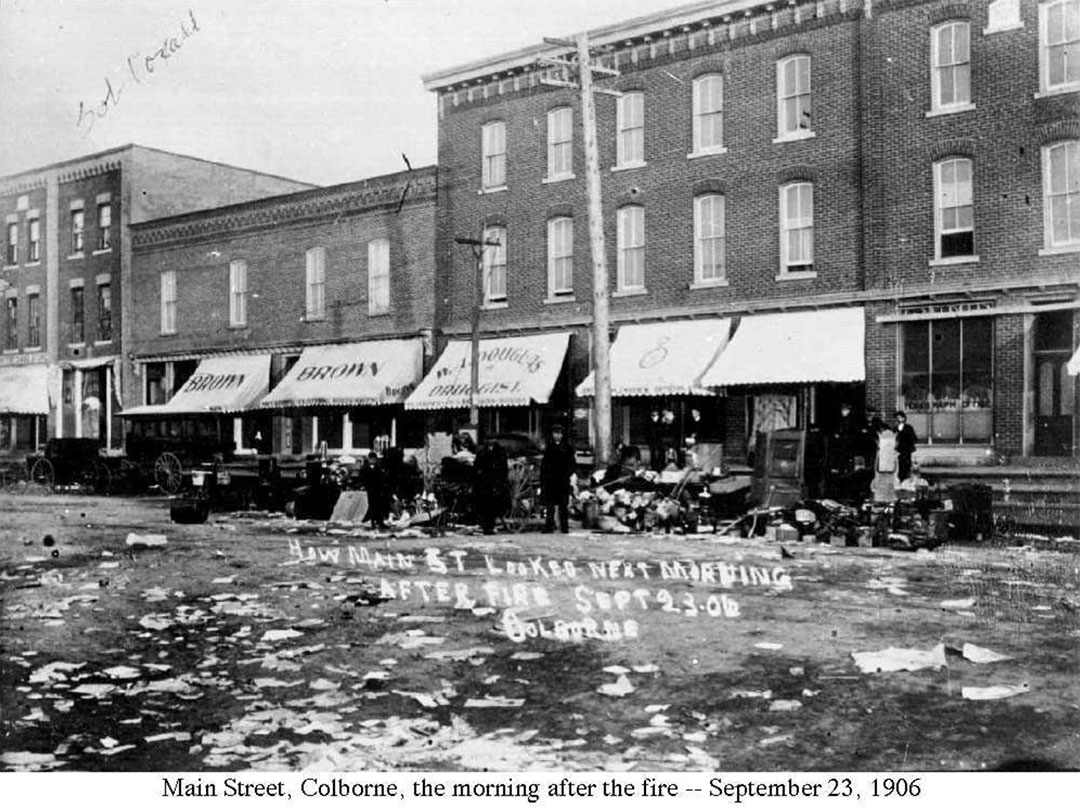 Figure 5. The north side of King Street on the day after the fire of 1906 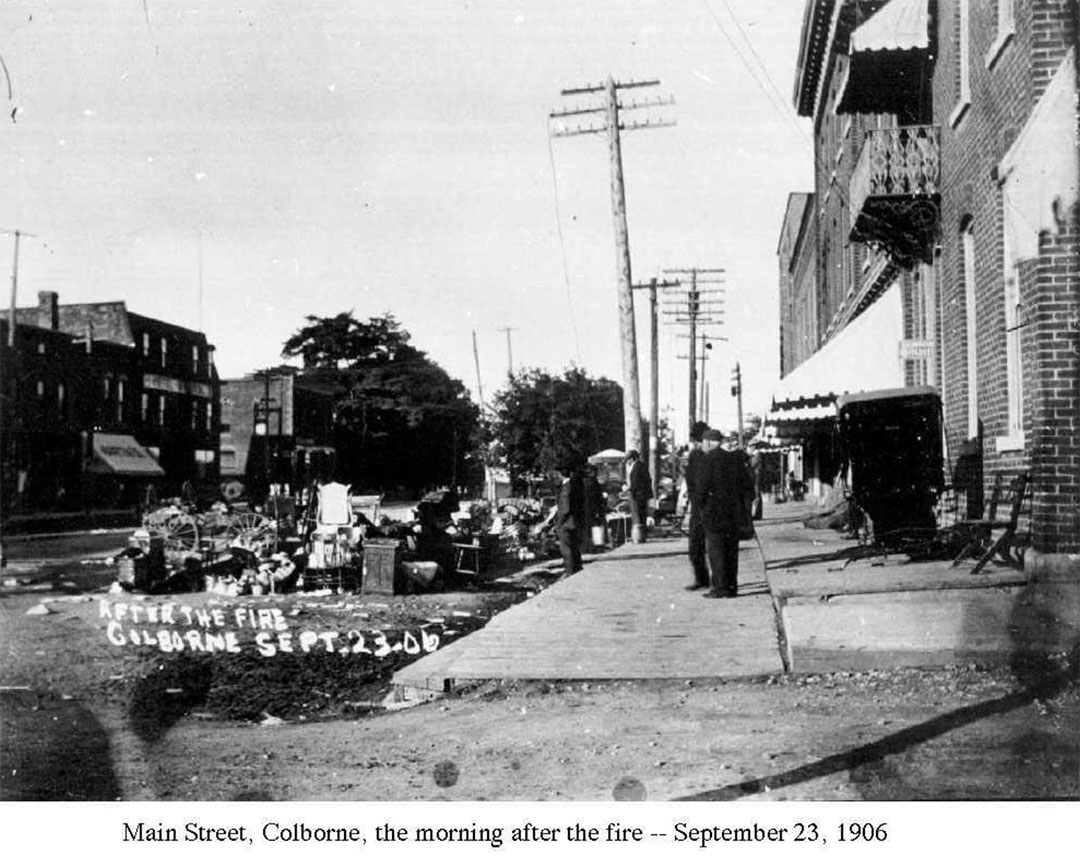 Figure 6. Looking west along the north side of King Street from the corner of Maybee Lane on the day after the fire of 1906 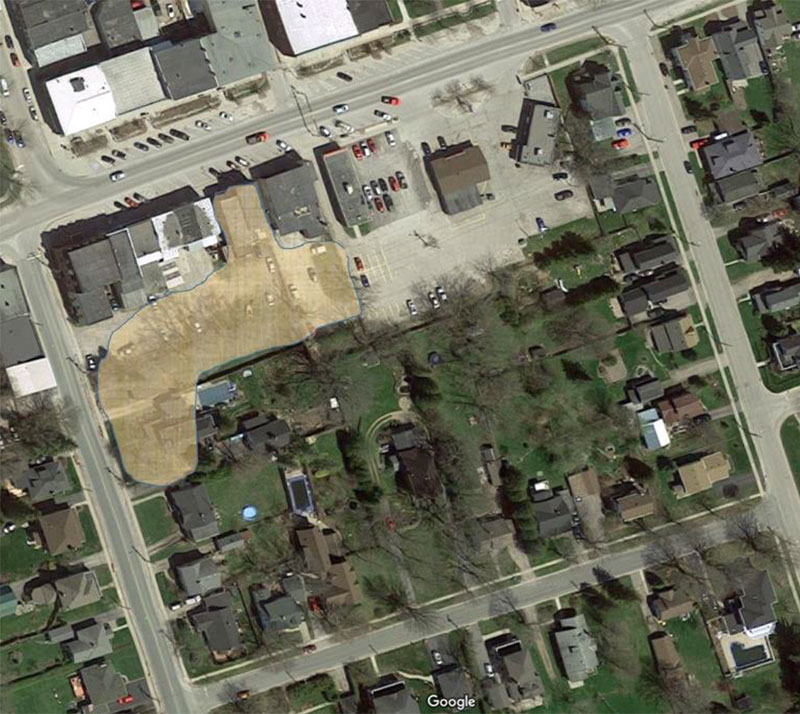 Figure 7. Approximate area burned in the fire of 1906