Orchard Fowler is often mentioned as a potter (e.g., in the family history written by Betty Haight that resides in the Cramahe Archives) and the only documentation I have seen of this consists of an 1857 gazetteer. He is listed as a farmer in the 1842 census and as a yeoman (=farmer) in 1842 and 1855 land records. The 1861 census lists him as a fur dealer. Obviously, pottery was only one of several sources of income. Mrs. Haight’s document states that:

“Orchard James Fowler” had one of the first pottery businesses in Canada. He made the pottery pieces from clay in the creek on his property, loaded it on a wagon and went to Toronto to sell it along the way. He would change horses at Sam McLaughlin’s livery stable in Oshawa. Later my grandfather William Hoarse Fowler, did likewise and became a good friend of Sam McLaughlin who started General Motors.”

This requires a little revision. Orchard James Fowler was dead before Sam McLaughlin (1871-1972) of General Motors fame was born. McLaughlin’s father Robert Samuel McLaughlin (1836-1921) did, however, open the McLaughlin Carriage Company in Oshawa, though this too wasn’t until 1876, after Orchard’s death. It is certainly reasonable that Orchard’s son William might have known Robert and his small son Sam in the 1870’s and 1880’s.

Orchard Fowler was married to Eliza Ann Thompson (1812-1890). Since she was a native of Hastings County (Belleville?), Orchard undoubtedly met her after arriving in Canada. Since he arrived in 1831 and their first son was born in July of 1832, this means the marriage probably happened in 1831. Orchard and Eliza had five or six children, as far as can be determined (see below): George, Charles, Timothy, Harvey, William, and possibly Minnie.

The house in Colborne occupied by the Fowler family still stands and is now the Colborne Guest House. The Colborne Guest House website indicates that “the house was built between 1829 and 1830 by Orchard Fowler…who received the concession by the Crown in 1827”. However, other records suggest that Fowler didn’t arrive in Canada until 1831 and Colborne until 1839, and land records show that he never owned Reid Lot 24 on which the Colborne Guest House stands. Of course, this does not mean that he didn’t live there. The Fowlers could easily have lived in a house adjacent to property they actually did own: Orchard Fowler purchased a 2.75-acre parcel of land composed of what would later (1862) be known as Reid Lots 7 and 11 immediately north of Lot 24 (Figure 1) from Ozem Strong (1784-1857) in 1842. 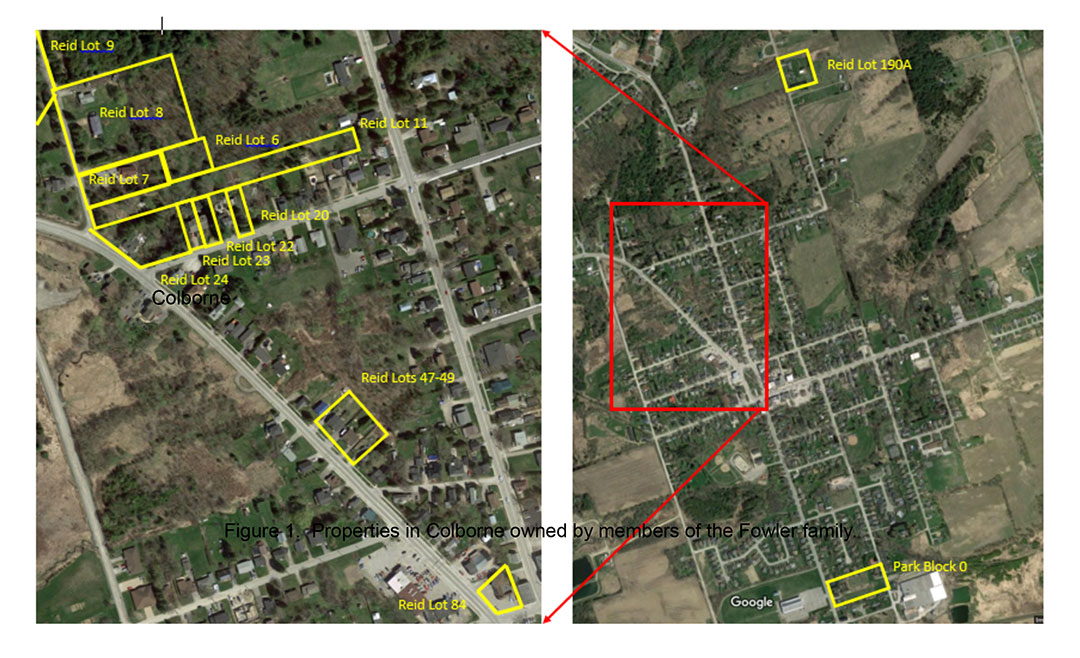 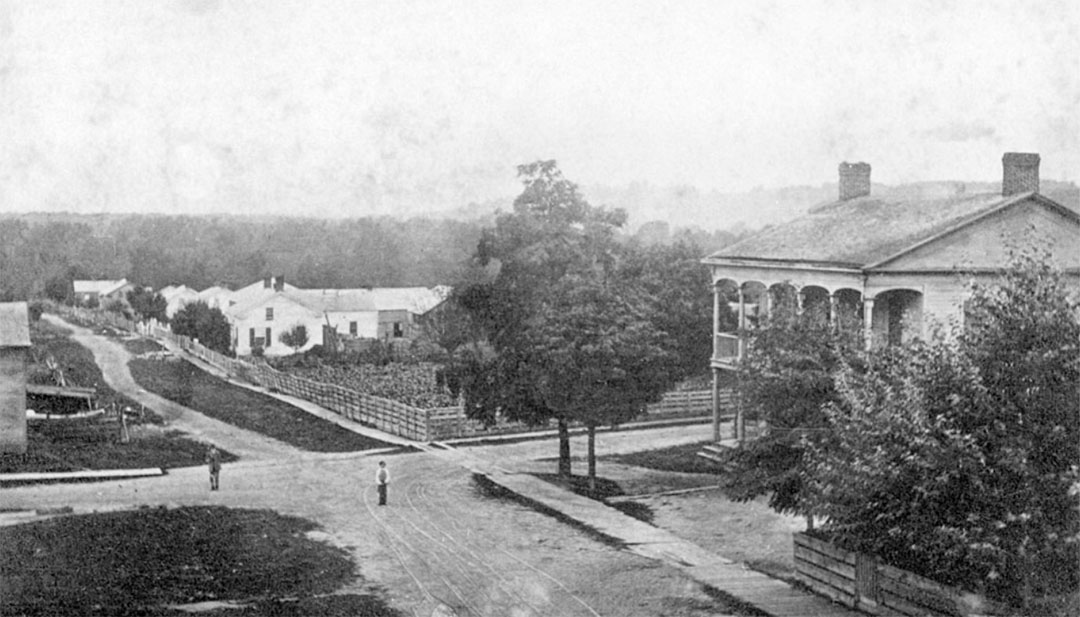 It had been the site of the Colborne Hotel (Figure 2) since at least 1838. The proprietor of the hotel at the time was probably Albert Yerrington (?-?), and the Fowlers would have been his landlords. The final piece of property owned by Orchard Fowler was composed of Reid Lots 47-49 along the eastern side of Toronto Street north of Norton Lane (Figure 1). Fowler purchased them in 1855; they remained in the Fowler family until 1883.

The information about this hotel was taken from a photo caption in a newspaper clipping, likely the Colborne Express, undated. Article entitled – Colborne in 1856.

The photo caption reads:
North-west corner of the Market Square in the 1860’s. The hotel on the corner is probably the Northumberland Exchange Hotel, the main stage coach stop in the village.

The children of Orchard Fowler and Eliza Thompson
George Orchard Fowler (1832-1899) was born in Belleville and accompanied his parents to Colborne in 1839. He lived in Colborne for the rest of his life (although, as mentioned above, no records have been found in the 1851 census). Prior to 1861, records list his occupation as yeoman (=farmer). From 1871 through 1873 records suggest his primary occupation was as a potter. Beginning in 1877 he was a collector of customs and he remained so for the rest of his life. One record for 1899 (the year he died) lists “loan agent” as his occupation but it doesn’t elaborate. George married Sarah Small Clarke (1838-1885) in Colborne in 1859. Genealogies list five children: Anna, Mary, Richard, Louise, and Frederick. Three other children (William, Alexander, and Wallie) are listed in some genealogies, but these are actually the children of a different George Fowler. George Fowler died of a cerebral hemorrhage in 1899. Over the years he owned several properties in Colborne (Figure 1), apart from Lot 24, discussed above. From 1857 to 1875 he owned Reid Lot 190A in East Colborne. From 1858 to 1880 he owned Reid Lot 7, which he sold to his brother Harvey. Also in 1858, he received Reid Lots 47-49 from his parents. He sold Lot 49 to his brother Timothy in 1865 and Lots 47 and 48 outside the family in 1883. He purchased Lot 22 in 1861 and sold it, also to Timothy, four years later. He owned part of Lot 9 from 1882 until his death and Reid Block O from sometime after 1883 (it’s a bit obscure) until 1893.

Charles Thompson Fowler (1834-1860). Very little has been found about this member of the Fowler clan. In 1859 Reid Lot 24, the lot on which the Fowler house still stands, was transferred by his brother George to Charles and another brother Timothy as trustees. He died in Colborne at the age of 26 in 1860.

Timothy Guy Fowler (1836-?) and his family disappear from Cramahe censuses after 1871. Records exist for 1861 and 1871 of his having been a potter. He was married at least twice, once to Harriet Sanborne (1836-?) and once to Charlotte Jane (surname unknown, 1839-?). There were at least three children (Eliza, Orchard, and Lucy) but sources vary as to which wife was their mother. Timothy Potter was trustee along with his brother Charles for Reid Lot 24 (see above). He also owned Reid Lots 23 and 22 from 1861 and 1865, respectively, until 1871.

William Horace Fowler (1855-1937) was a late addition to the Fowler family, born in Coborne 18 years after his next youngest sibling. Most genealogies seem to list his name as William Henry Fowler, but his middle name is Horace in both his marriage and death records. Mrs. Haight spells it “Hoarse”. William H. Fowler appears in Cramahe censuses for 1861 through 1921, although he seems to be missing for 1911. He was a potter in his early life (1880-1893), but later on he was a commercial traveller (1901, 1921). His death record in 1937 indicates that he had been employed as a “wholesale jobber” in the cigar, tobacco, and confectionary business for 40 years. A jobber is someone who purchases goods from wholesalers and sells them to retailers. W. H. Foster died of coronary occlusion in Hastings, Percy Township. Foster married Theresa Jane Stapleton (1861-?) in Consecon, Prince Edward County in 1880 and had three children: Eliza, Claude, and Harry.

One Ancestry.ca genealogy lists a further child, Minnie, without any documentation, and without birth or death dates. No other reference to such a daughter has been seen. Is it possible this is a mistaken reference to Minnie F. Fowler (1868-1940), daughter of Harvey Fowler and therefore granddaughter of Orchard and Eliza?

Children of George Orchard Fowler and Sarah Small Clarke
Anna Gertrude Fowler (1860-1865) died at the age of five in 1865.

Louise Maude Fowler (1867-1915) married dentist Daniel Webster Massey (1864-1925) in 1904 in Lanark County. She died in Cobourg of cerebrospinal meningitis in 1915. Daniel Webster Massey was the grandson of the brother of Daniel Massey (1798-1856), founder of what would become the Massey Ferguson Company, and great grandfather of Vincent Massey (1887-1968), the first Canadian-born Governor General of Canada, and Raymond Massey (1896-1983), famous Hollywood actor. This means that Daniel was the second cousin of the father of the famous Massey brothers.

Children of Timothy Guy Fowler and ?
Eliza Ann Fowler (ca. 1863-?) appears in the 1871 Colborne census. No further information has been found.

Children of William Horace Fowler and Theresa Jane Stapleton
Eliza Fowler (1880-?) was born in 1880 but does not appear in the 1891 census with the rest of her family. Presumably she died young(?).

Claude Horace Fowler (1884-1924) appears in Colborne censuses for 1891 and 1901. He married Lillian Irene Longbottom (1888-1972) in Toronto in 1911, when his occupation was listed as what looks like “traveler”. Claude Fowler signed attestation papers for the CEF in 1915, at which point he was a dentist, but no information about his military service has been found. In 1921 he was working as a dentist in Huntsville, Muskoka District. He died in Colborne of acute heart failure secondary to “shock and acute alcoholism” in 1924. Claude and Lillian had one son, William (ca. 1913-?), who was a Cramahe resident. He is the Bill Fowler whose correspondence with Eliza Padginton during World War II resides in the Cramahe Archives.

Harry Cedric (sometimes spelled Sedrick) Fowler (1890-1941) is listed in Colborne censuses for 1891, 1901, and 1921; where he was in 1911 is unclear. He married Norma Caroline Lugnes (ca. 1891-?) and appears to have had two children prior to the 1921 census, both born in Colborne: Claude Orchard Fowler (b. ca. 1916) and June Fowler (b. ca. 1917). Claude married Louise Maurhoff (?-?) in Colborne in 1938, at which point he was working for the family firm H. S. Fowler and Son, wholesale tobacconists and confectioners. The Betty Haight referred to at the beginning of this write-up was another daughter, but no further information has been found about her except that in her document in the Cramahe Archives she states that she was born in the Fowler House in Colborne, and that as of 2014 she was residing in Port Hope. Harry died of acute heart failure secondary to alcoholism in Cobourg in 1941. He had lived there for 4 years at the time. His death certificate indicates that he had been in the tobacco and confectionary business for 22 years.