There were two extensive fires on the south side of King Street in the early years of the 20th Century. The first was the one in 1906 fire discussed here. Arnold Warren in his 1984 newspaper reminiscence gives 1912 as the date of the second fire, but in fact it occurred on 9 May 1915, as described in an article from the Cobourg Sentinel-Star on 14 May 1915:

“Colborne was visited by another serious fire on Sunday evening. About 11 o’clock fire was discovered in the hay loft of Bradley’s livery barn, in the Yeomen’s [sic] block. In this block, besides the livery were two families living, as well as a Chinese laundry. When the fire was discovered the entire loft was ablaze. The two families escaped. The horses and rigs of the livery were saved. From there the blaze spread to an implement warehouse, owned by John Reeves. Behind this is a curling rink and next to the warehouse is a building used as a butcher shop and residence of Jas. Peebles. Next to this is a double dwelling owned by F. L. Webb and occupied by C. Robinson and William Henry, and next to this is another residence owned by G. M. Peebles. The fire then struck the brick Yule block owned by Wm. Mutton, but this was saved by a bucket brigade and with blankets, etc. The loss is considerable, though most, if not all, of the buildings were covered by insurance. Colborne has one of the old hand fire engines, but it refused to work..”

As with the 1906 aftermath fires, the 1915 photographs are labeled with the date the photographs were taken, 10 May 1915, not the date of the fire.

The fire started in “Bradley’s livery barn in the Yeomen’s block”. No record is available for anyone named Bradley running a livery stable in Colborne, but there was a large family of Bradleys in Cramahe Township at the time. All of the men were listed as farmers in available records. Several, however, were of an appropriate age to have been the operator of the livery stable in 1915. Or this might have been a Bradley for whom there is no other documentation. Or might the name have been “Burleigh”, not “Bradley”? Walter J. Burleigh was a liveryman who had been involved in the 1906 fire as well (see above).

The mention of a Chinese laundry is interesting. According to Arnold Warren there was a Chinese laundry on Percy Street in 1919. The only Chinese person known to have been a resident of Colborne up to that time was Ling Lee (ca. 1858-?) who was listed as a laundryman in Colborne in the 1901 and 1911 censuses. It seems likely that in 1915 his laundry was on the south side of King Street and that he moved to Percy Street after the fire.

Figure 8 is a photograph taken to the east along King Street, with ruins resulting from a fire just off the image to the right. This generally has been considered to be a photograph of the 1906 fire, and it is labelled as such in the Cramahe Archives. However, note that there are no leaves on the trees. This doesn’t work for 23 September, but it would be fine for 10 May. Also, the group of rubberneckers on the right side of the photograph are far too far east along King Street to be looking at the 1906 fire. This photograph was taken the day after the 1915 fire, not the 1906 fire. 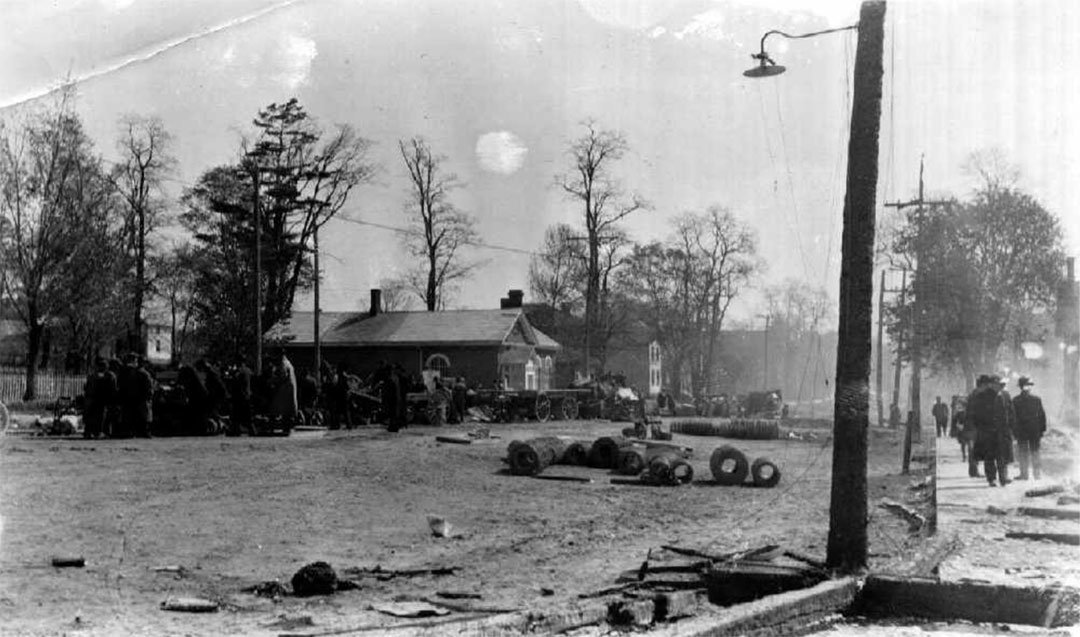 Figure 8. View to the southeast from the south side of King Street after the fire of 1915

In the background in Figure 8, on the other side of the street, is the Land Records Office. Beyond that is a white house that still sits on the western half of Reid Lot 169, now 61 King Street East. In 1915 it was on the property of Frank L. Webb (1864-1937), a Colborne barrister. Between them and over the rooftop of the Land Office can be seen the roof of the Seaton House (now 57 King Street East), owned in 1915 by Emily Spilsbury (1858-1947). The house visible through the trees to the left of the Land Office is no longer present.

Figures 9-11 are three more photographs taken the day after the 1915 fire. Comparison of Figure 9 with 8 shows that the house in the left half of Figure 9 is identical to the house whose edge is barely visible on the right side of Figure 8. This means that Figure 9 is taken in the same general orientation as Figure 8: eastward. According to the 1915 newspaper article, the fire moved eastward destroying everything up to the “brick Yule block”. Reid Lots 231 and 232, just west of Victoria Street, had been owned by Charles A.Yule (1868-?) before they were purchased by William Mutton in 1914, so they are clearly what the article refers to as the “Yule block”. The house in the photograph is therefore the one “saved by a bucket brigade and with blankets, etc.” This house still stands at 50 King Street East, although it no longer has the chimneys so prominent in the old photographs. 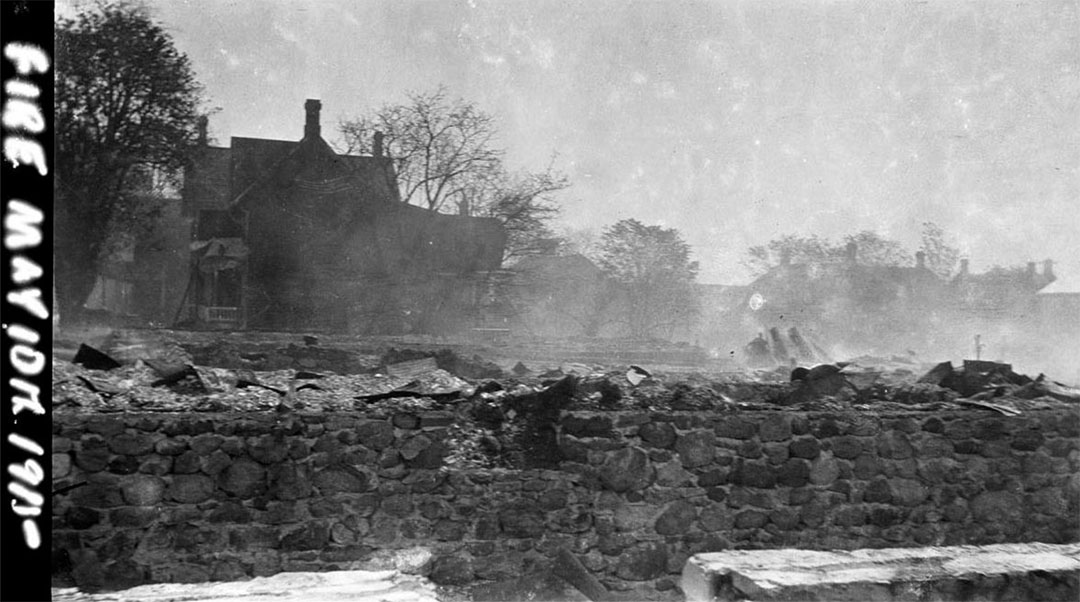 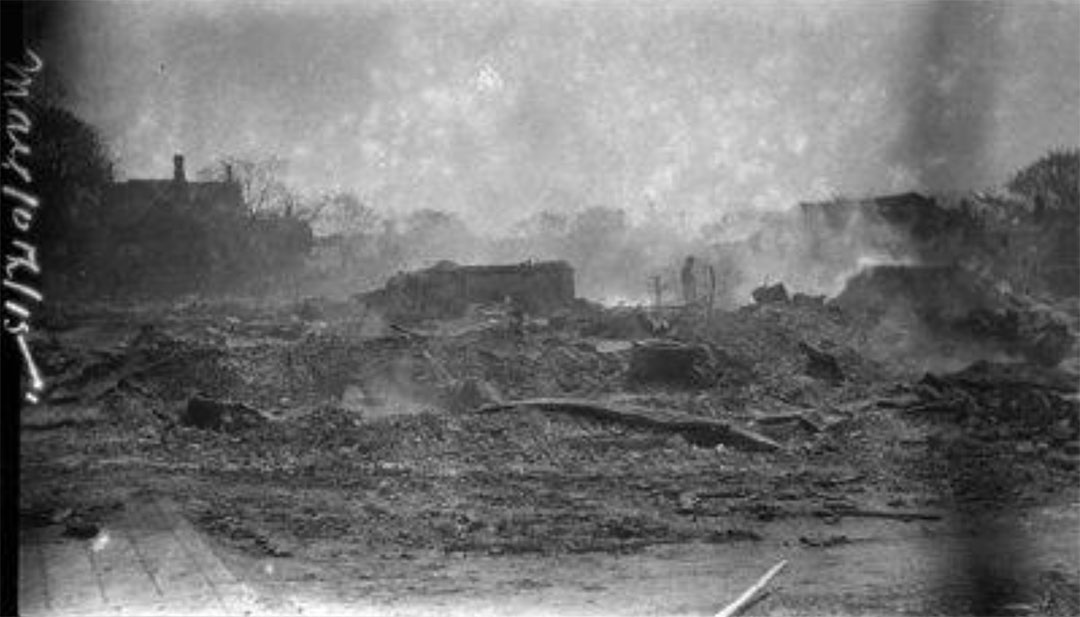 Figure 11. The result of the 1915 fire. This image is flipped right to left from the way it appears in the Cramahe Archives.

The same house is visible in Figure 10, but from a greater distance, so Figure 10 is also pointing east. The third image of the 1915 fire in the Cramahe archives is obscure until one realizes that it has been flipped horizontally. Once it is flipped back to its proper orientation, as presented in Figure 11, the same house is apparent in the left side of the image. It is taken from somewhat farther south away from King Street than the other two photographs, where the cameraman was very close to or, in the case of Figure 10 on, the King Street sidewalk. Notice that there is a section of stone wall standing up from the ground in front of the house in Figure 11 but right of the house in Figure 10. This is the same section of wall in the immediate foreground in Figure 9.

Between the tree and the Mutton house in Figure 9 the house on the other side of Victoria Street (now 52 King Street East) can be made out. It was owned in 1915 by Irving Bailey (1861-?). The tops of other buildings can be seen in the distance. These are along Victoria Street to the south. Only more recent houses exist there now. 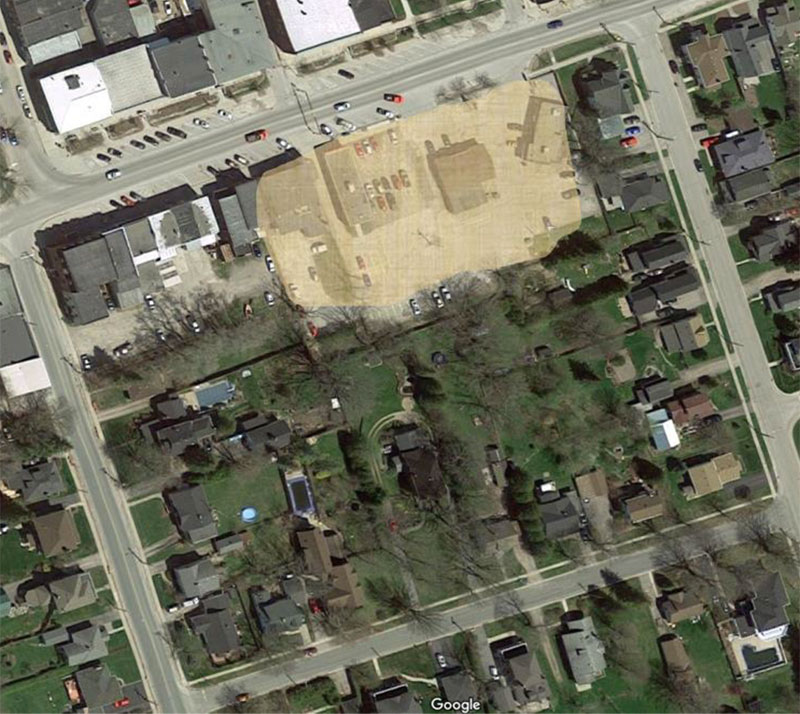 Figure 12. Approximate area burned in the fire of 1915