Tour maps available at Township office – 1 Toronto Street, Colborne ON
Click on a location beneath the map to show its location within the map – scroll down for the property history

Joseph Abbott Keeler, son of the first settler of Cramahe Township, founded the village of Colborne in 1815 when he opened the first store and post office. He had the village surveyed, laid out the public square and donated the land. (it was incorporated in 1859). The name of the Square was changed in 1871 to honour the reigning monarch and the settlers’ United Empire Loyalist heritage. The two six thousand pound cannons are dated 1844, and were perhaps used in the Crimean War (1853-1856). The World War I Cenotaph and Canadian Soldier were dedicated August 26, 1921. 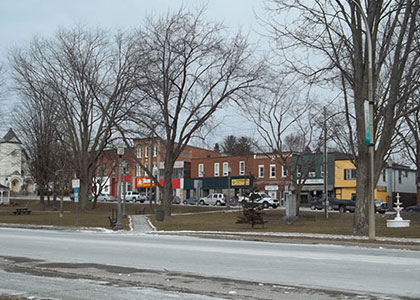 This site may have had a structure in the very early 19th century, but the first written record of a church, built by the Wesleyan Methodists, was 1830. The church as it appears today was built in 1862. Its imposing Gothic Revival features include angular-shaped gables, a high pitch double cross gable roof, and a pyramidal dormer front tower with lancet windows. The Daniel Lewis Simmons family donated the pipe organ to the church in 1910. 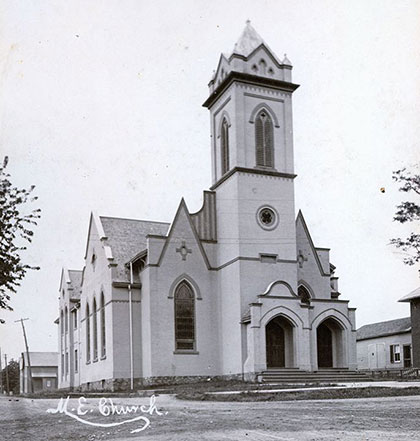 Joseph Keeler (1770-1839) was the first settler who landed on the shores of Cramahe Township with forty United Empire Loyalist families from Rutland, Vermont. Keeler, his son Joseph Abbott Keeler (1788-1855) and his grandson Joseph Keeler (1824-1881) were instrumental in establishing the settlements at Lakeport, Colborne and Castleton. In 1820, J.A. Keeler built this beautiful Neoclassical house which echoes the Grafton Ontario Barnum House, a National Historic Site, which was built a few years previously. 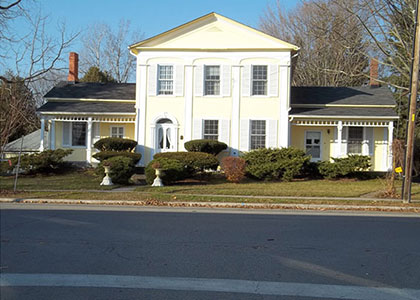 During the reign of Queen Anne (1702-1714) an architectural style was born and it enjoyed a revival, particularly in the New World, in the latter part of the 19th century. 8 Victory Lane (as it was then known) is probably one of the finest examples of the Queen Anne Revival style of architecture in Cramahe township. It is characterized by fine brickwork in warm, soft finished tones, terracotta panels and crisply painted white woodwork. An imposing addition to the village’s streetscape. 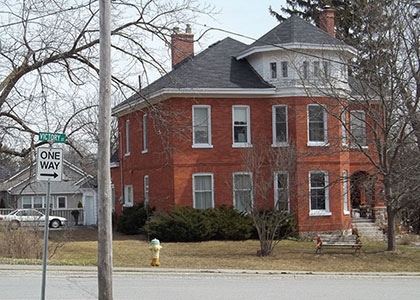 During the winter of 1829, limestone was hauled by oxen to this site. The stone church was built in 1830, the pulpit and spire begun in 1832 and completed in 1833. Joseph Abbott Keeler, the town founder and son of the first settler, donated the land to the Presbyterians as he did for the Methodist congregation, though he himself was an Anglican. His only request was that a seat be reserved for him. 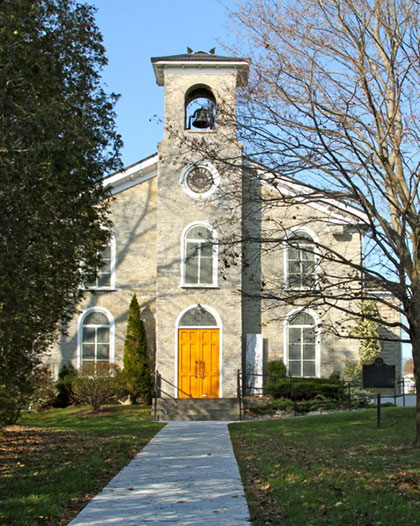 Eliza Gilchrist, eldest daughter of J.A. Keeler, sold lot 167 to the County of Northumberland and Durham in 1861 for $100.00, for the express purpose of building a County Registry Office. And it served that purpose for the next 132 years. Upon closing, the site was retained by the municipality and it is now the home of the Colborne Art Gallery. 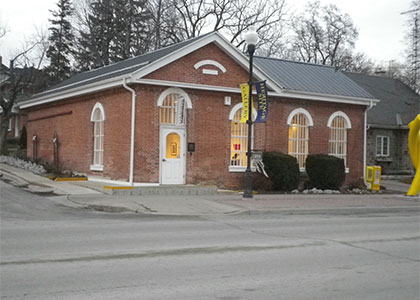 Seaton House, an Italianate, was probably built around 1834 by Joseph A. Keeler for his daughter Mary. When Mary died, the house passed to her sister Ann, then eventually to John Bennet Marks of Kingston. Local folklore suggests that Marks willed the house to Emily Spilsbury because she had taken care of him in his old age, and further suggests that Emily, who lived in the house from about 1915 to 1947, was married to a mariner who died at sea and whose ghost haunts the house. In fact, Marks never lived in Colborne and Emily, who was only 14 when Marks died, inherited the house because she was his cousin’s granddaughter. There is no record that Emily ever married a mariner or anyone else, so that is not the source of the ghost story.
Perhaps Mary or Ann Keeler, both of whom died in their 20s, are more likely candidates. 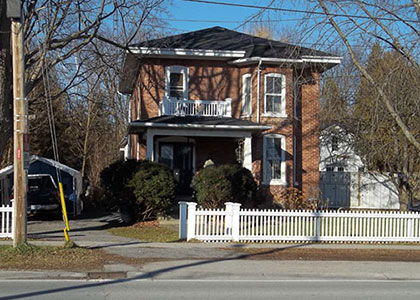 10 North Street, built in 1921, is a classic craftsman cottage, a style of architecture which evolved from the Arts and Crafts movement in the early 20th century. In 1879, Jeremiah Scripture, descendant of one of the founding families, owned this lot as well as other contiguous properties. It is significant to note that 137 years later, the Scripture family still owns and occupies the property at No. 10 North Street. 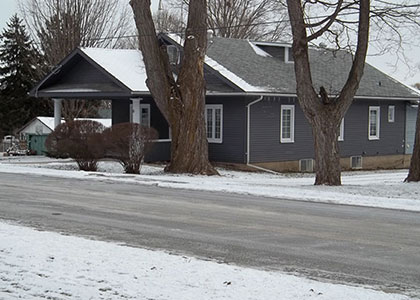 Originally part of the clergy reserve set aside in the late 1790s, this property was farmed by Richard Ogden though the land still belonged to the Crown. In 1872 the property was acquired by colourfully named Napoleon Bonaparte Dailey and Nelson Joseph Dailey, sons of a local grocer. William Coxall took over ownership in 1888 and designed and built the graceful Italianate house as a wedding present for his daughter. It is speculated that he lived in No. 4 North Street next door during construction. 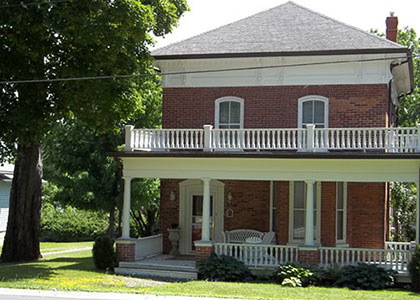 In 1863, Farquhar McRae, a Scottish born boot maker, put this property up as collateral for “several promissory notes” and evidently defaulted as the holder of those notes subsequently sold the property in 1879, to Thomas Brown, a commercial traveller. Brown added the large Italianate front on the building in 1879 and was the owner until 1923. James Archer Brown, the town doctor for a number of years, who married Joseph Abbot Keeler’s granddaughter, was born and raised in the house. In between 1927 and 1967 Thomas Brown’s gracious home became the village funeral parlour. In the 1970s, Vi Mislead and Arnold Warren were its occupants. Ms. Milstead was the first female bush pilot in Canada; a member of the Air Transport Auxillary during WWII; a member of the Canadian Aviation Hall of Fame and a recipient of the Order of Canada. 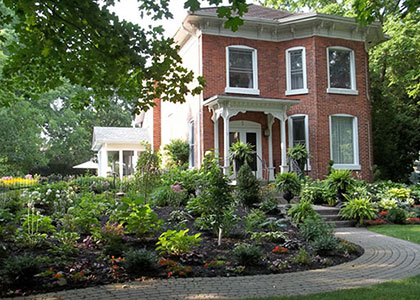 17 Division Street, Colborne has always been “The Doctors’ House” over its long life. Beginning in 1888 with Dr. Richard Thorburn. In 1906 Dr. Thomas Bruce Hewson acquired the property and in 1911 he sold to Dr. James Archer Brown. The records must be interpreted, but the original house might have been built as early as the mid 19th century. An earlier date is most likely because when Thorburn purchased it in 1888 we speculate that he moved his practice from King Street into an existing building. 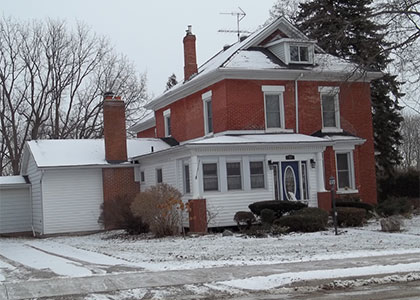 Reputed to be among the oldest dwellings in Colborne, this was the home of Scottish immigrant John Steele and his wife Mary Spalding from 1831-1843. However there is reason to believe the house predates 1820. Steele, a founder of Queen’s University held many other posts such as magistrate, newspaper editor, Board of Education trustee, member of literacy and agricultural societies etc. In 1843, the Steeles moved to Grafton and sold 3 King Street West to Cuthbert Cumming, a Hudson’s Bay trader. He sold it in 1858 to the Scougale family, local dry goods merchants, whose business was in the building next door. The Thorntons, part of the Scougale family, lived here for only 9 years of the Scougale clan’s 101 year occupancy, yet oddly the house carries their name. 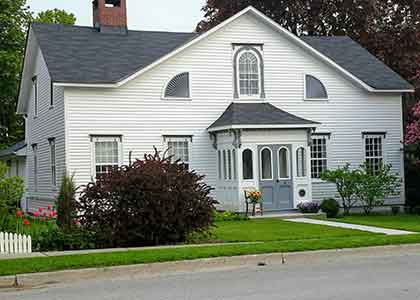 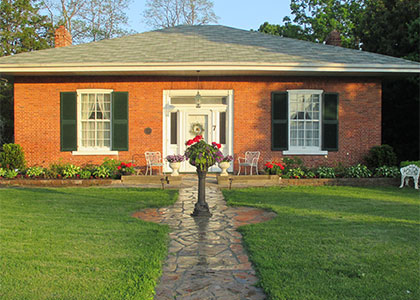