The house at 52 King Street East, at the corner of Victoria Street, in the village of Colborne, appears in the 1878 Durham and Northumberland historical Atlas (pg.95). At the time, it was a very large and grand red brick estate house with a two story carriage house in the rear and an iron picket fence around the whole property. It must have been one of the premiere homes along the Kingston-York highway.

It is interesting to see the changes over time.

The 1878 version the house was a large rectangular two story. There was gingerbread trim everywhere, decorative brackets and metal fretwork on the roof peak. The most notable feature was the projected two story vestibule on the front facade with its gable roof. Back in the day, the bottom half of that projection had a very fancy enclosed Victorian porch with gingerbread, and rounded windows. On either side of the projected vestibule were matching open porches. Combined, these features gave the house its presence. All the windows in the house were the same size and shape (tall and narrow) accept the feature Palladian window above the front door. Today, there are two entrance doors on theWest facade, but the windows are still there, creating the same symmetrical look.

In a 1924 picture of the house, gone was the enclosed porch to be replaced by a large open porch running across the front facade with sturdy Doric columns and a solid knee wall rather than spindles. There is a small covered porch on the West of the house giving shelter to the side door.

Today, the mass of the building is the same but the front porch is gone completely, possibly the victim of road widening. The front gable gingerbread remains but the metal fretwork and eaves brackets are gone, and the brick has been painted white.

Number 52 King Street East in Colborne was the residence of Levi. C. Bailey and his wife Mary Merchant in the mid 1800s. Clearly Bailey was a person of some consequence given the size and setting of the house. (see the 1878 Durham and Northumberland Historical Atlas (page 95). Census records show that he was the proprietor of L. C. Bailey and Sons soap manufacturing and also a general store in the village. His clerks are identified as Fred, Thomas, William and Charles Bailey.

Lot 31, Concession 1, Cramahe Township, was originally set aside as a Clergy Reserve (LINK). Although roads didn’t exist when the lot was surveyed, it consisted of the 200 acres now bounded by on the north by King St., on the west by Division St., and on the east by Elgin St. The southern boundary is now in the middle of the Ogden Point quarry. This clergy reserve included much of what was to become the southern part of modern-day Colborne.

When Levi Bailey died in 1905, Lot 230 was divided between his sons Irving, who inherited Levi’s house on the western half of the Lot (now 52 King Street), and William, who inherited the house he was already living in on the eastern half (now 54 King Street). Irving and William would continue to own these properties through the 1921 cut-off date. Both were involved with their father in the L. C. Bailey and Sons soap manufacturing company. No reference has been found to Irving’s wife, but the 1901 census lists a son, also called Irving (ca. 1891-?). William was married to Jennie Simmons (ca. 1871-?), a niece of Daniel Lewis Simmons, and had two children: Pauline (1894-1894) and Bruce Lionel (1897-?).

There is often a bit of guesswork involved in determining occupancy of historical houses. In this case, however, there is solid evidence for who lived in the house at 52 King Street, because the following picture appears in the 1878 Northumberland County atlas: 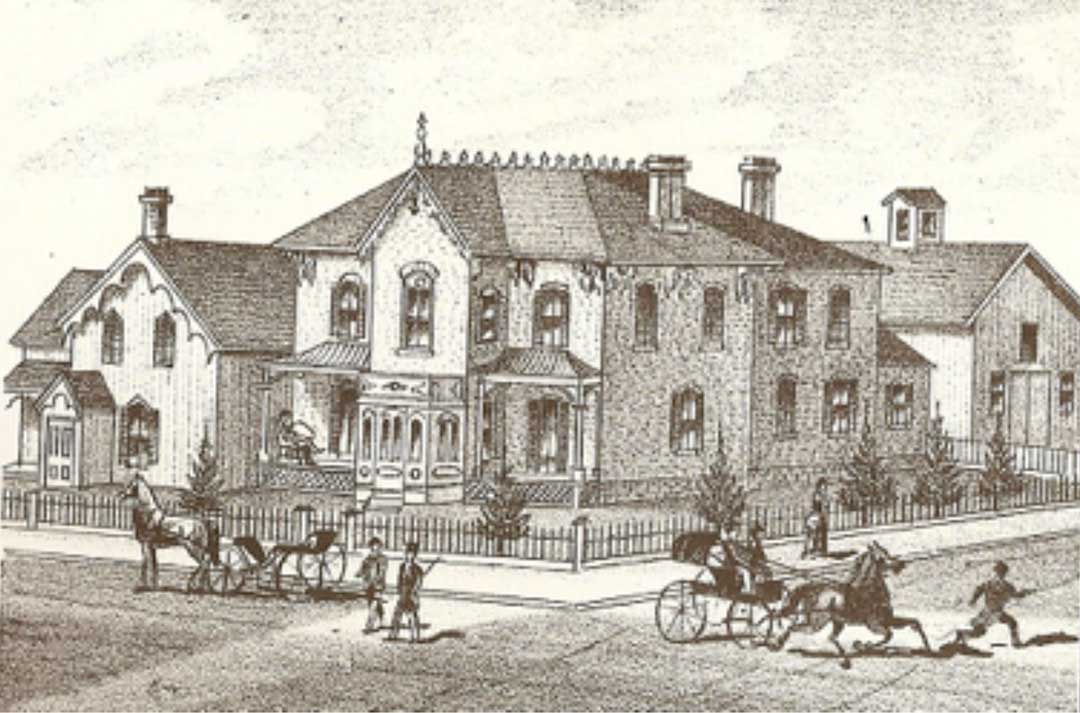 The caption reads: “Res. of L. C. Bailey. Cor. King, & Victoria Sts., Colborne, Ont.” Obviously, Levi C. Bailey lived there in 1878. Maybe that is even him sitting on the front porch. (I also like what looks like an image of someone almost being run down by a carriage in the lower right corner of the picture…). He bought the property in 1876. Whether he bought the house or built it sometime between 1876 and 1878 is unclear. He certainly lived there the rest of his life. The house to the left is the one now at 54 King Street, occupied by William Levi Bailey.