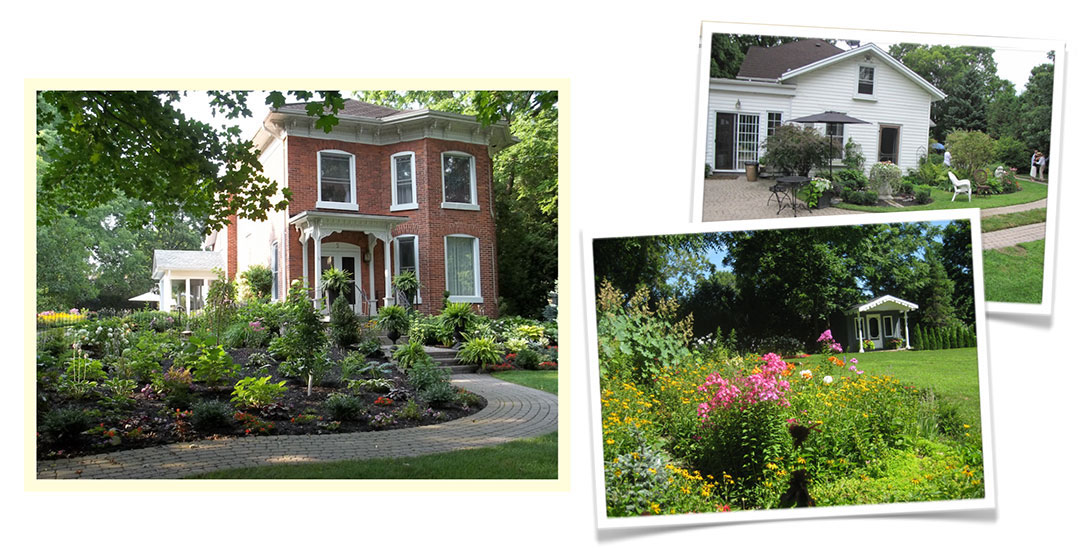 No. 5 North Street in Colborne village, is now a residential structure, but it was a funeral home from the 1930s to 1960s. Its tall, elegant profile is an example of the classic Italianate style so popular in the mid 19th century.

There are four other large brick Victorians on North Street alone. Italianate is best characterized by elaborately decorated details on a relatively simple form. The Thomas Brown House is red brick, with decorative bargeboard, “S” brackets, and ornamental cornice board, all of which are in keeping with Italianate architecture. It does not have the cupola, porches or tower seen in some of the more elaborate versions of this style and this could reflect the modest affluence and restrained nature of the people of Upper Canada. It currently sits on approximately one half acre of land, with extensive gardens, a shed and a dual carriageway that encircles the house. The house itself is set back 60 feet from the street giving it a certain gravitas. There is a two story bay window, and all the windows are the tall and narrow round head sash seen in most Italianates. They would probably have been 2 over 2 pane originally – now replaced. The double front door is off-centre, another common feature of Italianate houses. The back third of the house is probably the oldest construction – a former summer kitchen at ground level – and a half story above which may have been a child’s or servant’s room. This half story can be reached by a winding pine back staircase which remains in perfect condition. The main roof is metal shingle, thought to be original. There is no carriage house, though the North East corner, now part of the kitchen, was previously a garage within the footprint of the house used to house the hearse, according to old timers.

9 June 1863 Farquhar McRae, a Scottish born boot maker put the property up as collateral for “several promissory notes” and evidently defaulted as the holder of those notes subsequently sold the property in 1879, to Thomas Brown, a commercial traveller. Brown added the large Italianate front on the building in 1879 and was the owner until 1923. His son, the town doctor, James Archer Brown was born and raised there. Archer’s son, Thomas Boyer, was a great grandson of Joseph Keeler III (Joe MP) through marriage.

Lot 31, Concession 1, Cramahe Township, was originally set up as a Clergy Reserve (LINK). Although roads didn’t exist when the lot was surveyed, it consisted of the 200 acres now bounded by on the north by King St., on the west by Division St., and on the east by Elgin St. The southern boundary is now in the middle of the Ogden Point quarry. This clergy reserve included much what was to become the southern part of modern-day Colborne.

In looking at old property records, there are recurring hints that more interesting stories might be unearthed if we could just find the details. In this case we have Farquhar McRae, an immigrant from the Scottish Highlands, who in 1861 was a shoemaker and farmer, apparently successful because he had several employees and could afford to buy mutiple properties in Colborne and build a house there in 1863. By 1871 he was a “merchant”, but by 1881 he was only a clerk. In 1879 he apparently defaulted on a loan and lost his house. Why this apparent gradual decline in his fortunes? He last appears in the 1881 census. His wife was still around in 1901, but what happened to Farquhar? Did he leave? Did he die? It is difficult to track him because there are more Farquhar McRaes than one might think. Census records for 1881 show two in Scotland, one in California, and one in Elgin County, Ontario. It does not appear that any of them is our man.