171 King Street East in Colborne is one of the oldest buildings in the village.

Known as Keeler’s Tavern when it was occupied by the village founders, it is a classic “Loyalist” building.

The Loyalist architectural style mimics the American Federal style with its austere and straightforward quality in ornamentation, facade and footprint. These buildings are much more commonly found in the United States than in Upper Canada but Cramahe Township boasts at least two of them.

The Tavern has symmetrical fenestration and a very gentle pitch in the gable roof. The classic Loyalist, and this building, have the 12 over 12 or 12 over 8 pane windows commonly found in New England.

The original chimney would have been massive and in the centre of the building, with hearths clustered around it. The current owners have not been able to find the foundations of the sort of large brick cooking fireplace one might expect in a tavern of the era. Perhaps the kitchen was in a rear “tail” that no longer exists or the cooking could have been done in a separate building and the travelers fed cold meals to go with the spirits straight from the Keelers’ distillery.

This building has a rich history in the township and it has been well looked after in its 175 year life.

The Loyalist style is both aesthetically pleasing and functional. Travelers would be tucked up in one of the large communal sleeping spaces, one for women and children and one for men. The wide plank floors were painted then as they are today which made the soft pine more durable to the heavy boots of travelers.

The current owners, over the past 45 years, have faithfully restored the Tavern to match an 1830 water colour sketch by Lt. Col. J.P. Cockburn. In it we can see two large chimneys on the gable ends of the Tavern.

Keeler Tavern was built circa 1820 by “Old Joe” Keeler, the original United Empire Loyalist who landed in Old Cat Hollow in 1795, and his son. The Inn stands on the York-Kingston Road (now Hwy. 2). “The Corners” as Colborne was then known, was one of the stage coach stops for travelers who, due to weather, road conditions and the stamina of carriage horses, could only travel 10 miles a day. This explains why the towns and villages along this route from Kingston to Toronto are about 10 miles apart.

The first hotel that we know of in the Colborne area was the Keeler Tavern in what would eventually be East Colborne, but in the Women’s Institute Scrapbook there are articles by Mrs. Dalton Hetherington (1952) and Eileen Argyris (1990) that suggest that the “Morton House” at 152 King Street, may have been “a coach stop in pioneer times” as well. Margaret McBurney and Mary Byers in their 1979 book “Homesteads: Early Buildings and Families from Kingston to Toronto” discuss this house at some length. It is supposed to date from the era of the War of 1812, and in fact supposedly was used for barracks during that conflict. Until 1828 the house was on Crown land; after that it was owned by Kings College, the predecessor of the University of Toronto. The theory that it may have been used as an inn is apparently based on the fact that “the door in the second-story verandah [was] a feature typical of inn construction”. McBurney and Byers are equivocal in their claim that the house was an inn, though. Their summary sentences, which are anything but conclusive, were: “In view of the style of construction and location—right on the Danforth Road—could it have been used as an inn? To take speculation one step further, could it have been Keeler’s first inn?” If the Morton House was an ever an inn, it probably wouldn’t have functioned simultaneously with the Keeler Inn: it was less than 600 feet down the road.

The former Keeler Tavern is now a private home, sitting on the northeast corner of the intersection of the modern King and Parliament Streets (Figure 1). 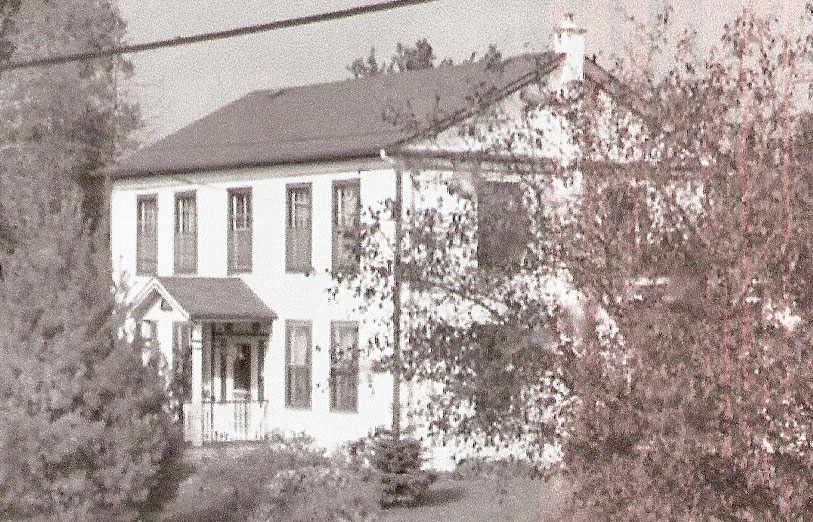 Nobody knows exactly when this tavern was built. The Danforth Road from York (Toronto) to the Bay of Quinte followed the line of modern Highway 2 and was completed in 1800. It was replaced in 1816 by the Kingston Road, which followed the same route, at least in the vicinity of East Colborne. According to a 1984 article from the Colborne Chronicle by Walter Luedtke, the tavern was built in a style popular from 1810 to 1840. It’s just speculation, but it would be reasonable to guess that the inn was built at about the time the road from York to Kingston opened. Stagecoach service between the two towns began in 1817, providing business. We know the tavern is probably not much younger than 1820, because a coin from that date has been found on the premises. Also, it is referred to in the diary of Phoebe McCarthy Roberts (1766-1850) who passed through Colborne in 1822.

James Pattison Cockburn (1779-1847) made a watercolour sketch of the Keeler Tavern (Figure 2). Argyris (2000), in “How Firm a Foundation” dates this sketch to “ca. 1830”, but Luedtke places it in 1839. This latter date isn’t possible, however, because Cockburn, a military man, had two tours of duty in Canada, one in 1822 and 1823 and the other from 1826 to 1832. It was during this later visit that most of his artwork was produced. Mrs. Dalton Hetherington in an article written in 1952 and included in the Womens’ Institute Scrapbook refers specifically to the date 1830. 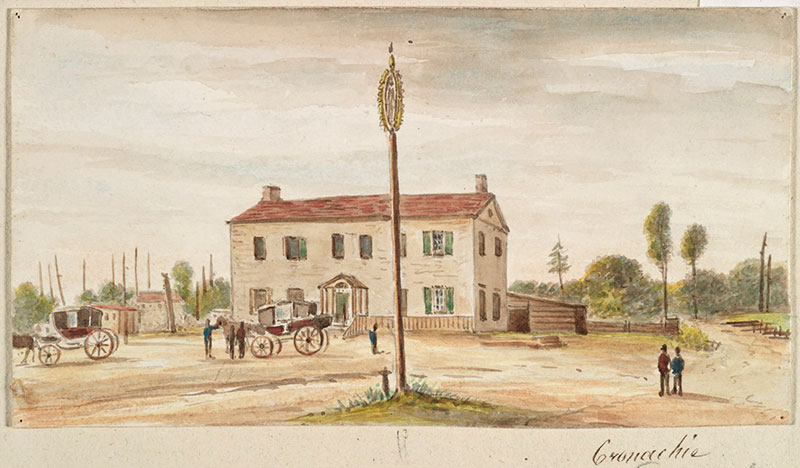 There are two stagecoaches sitting in front of the building in Figure 2. The pole in the centre foreground holds up the tavern sign, but the sketch doesn’t provide enough detail to see what the sign looked like. It is interesting to note the road leading off to the north on the right side of the sketch (east of the inn). Modern Parliament Street (formerly Furnace Road) is on the west side of the building and there is now no hint of a road where the one in the sketch is illustrated. Reuben Scott (1792-1872) had an iron foundry to the north of the inn and it was probably there before he bought the property from Titus Simeon Merriman (1806-1886) in 1832. It would have been in the trees behind and to the right of the tavern in the drawing. The road on the right side of the sketch may have been the road to that foundry. If this is the case, however, one would wonder if Furnace Road was yet present: why would there have been two roads leading to the foundry? An analysis of the sketch addresses that question as well. To the left of the inn you can see three buildings in the distance. These are too far away to be inn outbuildings, and they appear to be on what would later be Reid Lots 196 and 197. Although you can’t see a road in the sketch, these three buildings seem to form a line leading northward, and access to them would have to have been from a road leading in that direction. Access especially to the farthest of these buildings directly from the Kingston Road would have made no sense. So Furnace Road probably was there when the sketch was drawn.

The owner of the property on which the tavern was built was Sanders Hodges if it was built before 1820 or probably Jacob Loomis if it was built after that date. George Kent and David Pearson each held it only for brief periods in 1820 or 1821 and are less likely candidates.