This house is known locally as “The Doctors’ House” as it served that purpose for a number of years and a number of doctors.

That is the best explanation for the architectural variations on its basically Italianate structure. Clearly function has dictated fashion in this case, as there is ample evidence, both historic records and photos, that No. 17 was both home and practice for a succession of doctors.

The base building is the ubiquitous red brick common to Northumberland county. It is tall and narrow in shape, it has an off-centre front door. The tall narrow square windows do not have the more commonly found Italianate round sash. There is a hip roof, a large vestibule on the front facade, a dormer cut into the roof, a large addition including a chimney on the North side and the main entrance is now on the South side complete with porch.

There is a reproduction barn on the property which, apparently, is a faithful copy of the original outbuilding, including a perfectly rendered century old style cupola.

Like many of the century homes in this area, No. 17 has a very large rear yard with mature black walnut trees.

Like some North Street properties, No. 17 has one section that backs onto the businesses of Colborne’s main street – King Street or Highway Two – once the original Kingston/York thoroughfare.

No. 17 Division Street, Colborne has always been “The Doctors’ House” over its long life. Beginning in 1888 with Dr. Richard Thorburn. In 1906 Dr. Thomas Bruce Hewson acquired the property and in 1911 he sold to Dr. James Archer Brown (who grew up in the adjacent No. 5 North Street property). The records must be interpreted, but the original house was probably built between 1858-1888. The earlier date is most likely because when Thorburn purchased in 1888 we imagine he moved his practice from King Street.

When Cramahe Township was first surveyed in the 1790’s a seventh of its land was set aside for crown reserves and another seventh was set aside for clergy reserves. These reserves were rented to tenant farmers. The revenues from the crown reserves went to the government. The revenues from the clergy reserves originally went only to the Church of England (Anglican), but after 1824 the Church of Scotland (Presbyterian) was granted a share, and by the 1840s all of the major protestant denominations were included (except the Baptists, who refused to participate). The clergy reserve system came to an end in 1854, when all revenues reverted to the government.

Lot 31, Concession 1, Cramahe Township, was one of the clergy reserves. Although roads didn’t exist when the lot was surveyed, it consisted of the 200 acres now bounded by on the north by King St., on the west by Division St., and on the east by Elgin St. The southern boundary is now in the middle of the Ogden Point quarry. This clergy reserve included much what was to become the southern part of modern-day Colborne.

King sold the property to the Ontario Loan and Savings Company on 5 March 1888. It was purchased soon after (17 March 1888) by Richard Thorburn. Since King didn’t appear in the 1891 census, he apparently left Cramahe (or died?) soon after selling the property.

Richard Thorburn (1842-1900) was a physician who appeared in Cramahe birth and death records from 1876 to 1896. He was born in Queenston, Ontario and was practicing in Niagara in 1871, living with his mother and sisters. His office in Colborne was on King Street, at least in 1882 and 1885. After leaving Colborne in the late 1890’s he moved to Toronto, where he died of a stroke in 1900. He invariably appeared alone in Cramahe censuses, and I can find no evidence that he ever married.

Thomas and Mabel Hewson sold Reid Lot 242 to yet another physician, James Archer Brown (1883-1948), on 26 July 1911, and Brown transferred the title to his wife Ruth (née Boyer, ca. 1880-1948) on 10 July 1916. Ruth was a granddaughter of Joseph Keeler III. James Archer Brown was a native of Colborne. He received his MD from Trinity College, Toronto in about 1904 and received further training at the University of Edinburgh in 1905. He married Ruth Boyer in 1906. He practiced in Cannington briefly after returning from Scotland and his son Thomas Boyer Brown (1908-1977) was born there. He is listed in Colborne medical records starting in 1911, taking over the practice of Thomas Hewson. A death certificate has been seen for another child, Ruth, who was born prematurely and immediately died in 1913.

It is pretty clear that Thorburn, Hewson, and Brown lived in the house. In fact, Hewson was listed as living on Division Street in the 1911 census. Thorburn probably moved his practice there from King Street when he bought the house in 1888. It was then used as a home/practice by a sequence of doctors to our cut-off date of 1921 and beyond.

Thorburn paid $2500 for the lot in 1888. This would have been a lot of money for an empty lot, so there was probably already a house there by then. This house burned in the fire that started in the livery stables south of King Street on 22 September 1906. It’s clearly damaged remains can be seen in a photograph taken on the day after the fire (Figure 1). The current building was either rebuilt or repaired by the Hewsons. Mabel Hewson received the property from her father-in-law only a month after the fire. 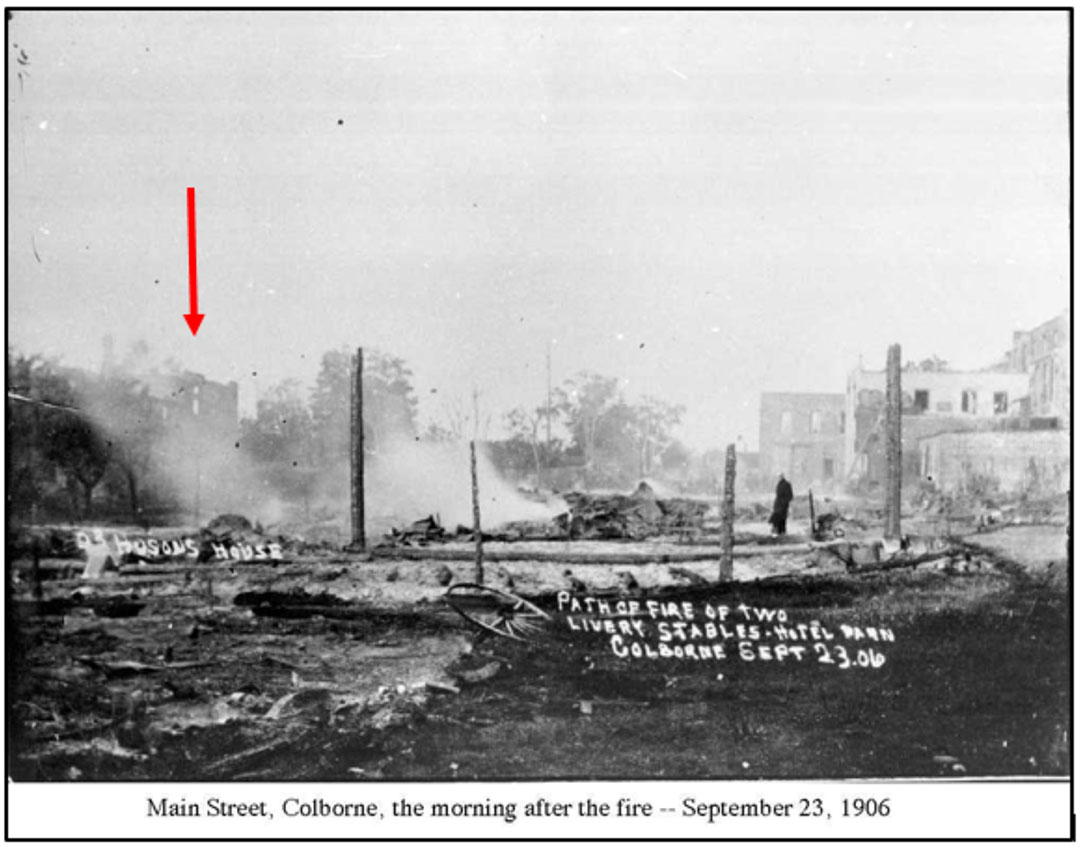