Masonry construction is the most recognizable trait of Ontario’s architecture that differentiates from Canada-adjacent USA which has predominantly frame houses with wood siding). The colour of the brick depends on the area in Ontario (i.e: the clay at hand). Having said that this house is stucco clad.

Ontario is noted for its conservatism, traced back to the 18th century first settlers to Upper Canada, with their United Empire Loyalist values. But Ontario’s 18th and 19th century architecture was also influenced by British style with the immigration of British commissioned officers who settled in Ontario on their “half pay” pensions.

This explains the architectural differences between Ontario (Regency, Gothic, Georgian, Italianate) and the adjacent US states (New England Saltbox, Colonial, grandiose Greek Revival in many public buildings, and the Federal or Adams style in commercial buildings and residences).

The Regency Cottage dates back to 1811-1820 in England, during which time the Prince of Wales, then Prince Regent, replaced his father, “Mad King” George III. He later became King George IV.

The Regency Cottage, also known locally as the Ontario Cottage, is fashioned after the “bungalow” adapted by the British from dwellings in India. It is usually single story but Ontario versions can be multiple stories (see the Cuthbert Cumming House, Colborne). Its over all square footprint has a low overhanging roof and often has a rear “tail” housing the utilitarian functions. Sometimes the roof is extended to form a verandah as is the case here. Full length windows or french doors were meant to take advantage of the breezes. A three bay centre door plan is most common though this one is offset. Sometimes there is a belvedere rather than the dormer seen here. This architectural style is one of the most ubiquitous in the Northumberland area.

In 1846, James Goslee, sold #115 King St. E. to J.M. Purdy (whose son bought Purdy Mill in Castleton in 1875). In 1857, Daniel Simmons, a prominent Colborne entrepreneur, bought the property. A photo from the 1850s/60s claims it to be “The Simmons House”. Simmons was a generous supporter of the Methodist Church and funded a new organ with a large donation and trust fund. One can only imagine the gracious entertaining that went on in this charming house – at least as far as Methodist entertaining went.

As discussed above under 91 King Street East, between 1846 and 1848 James D. Goslee sold off several properties in Lot 30, Concession 2 that he didn’t own. Reid Lot 180 in the southeastern corner of Lot 30, on which 115 King Street East now stands, was one of these properties.

Purdy retained the property at 115 King Street East until 16 May 1857, when he sold it to Daniel Lewis Simmons (1830-1915). Simmons is discussed elsewhere at length. Among other things he seems to have been a land speculator, having been involved in dozens of land transactions in Cramahe through his life. The purchase of the property in Lot 30 was among the earliest of these.
Simmons owned the property for the rest of his life. He died in 1915 and on 30 October 1920 the executors of his will sold it to Simeon D. Scripture (1894-1972) who immediately (the same day) transferred it to Sheldon J. Phillips (1885-1947). Phillips retained it for only a few months, selling it to Alpheus F. Todd (ca. 1894-?) on 15 April 1921.

I don’t think James D. Goslee lived on this property. He certainly owned several others in Colborne, including much of Lot 30, Concession 1, just across King Street. After 1850 I know he was living on Reid Lot 176 in the southwestern corner of Lot 30, Cocession 2. As for Daniel Simmons: perhaps I was mistaken, but I was under the impression that the house at 101 King Street East–the one set back from the road with the flight of steps in front–was the one we have been calling the Simmons House. I can do a more complete write-up at some point, but in brief 101 King Street East was owned by George Goslee from 1855 to 1863 by Anna Alida Webb from 1863 to 1887, by Annie McGlennon from 1887 to 1918, and by Archibald McGlennon after 1918. Never by Daniel Simmons. On the other hand Simmons owned 115 King Street East from 1857 until his death. It looks like 115 King Street East was the Simmons House.

Here is a photo from the Cramahe Archives purporting to be the “Simmons House”. The stovepipe hat and hoop skirts clearly place this picture from the 1850’s or 1860’s. 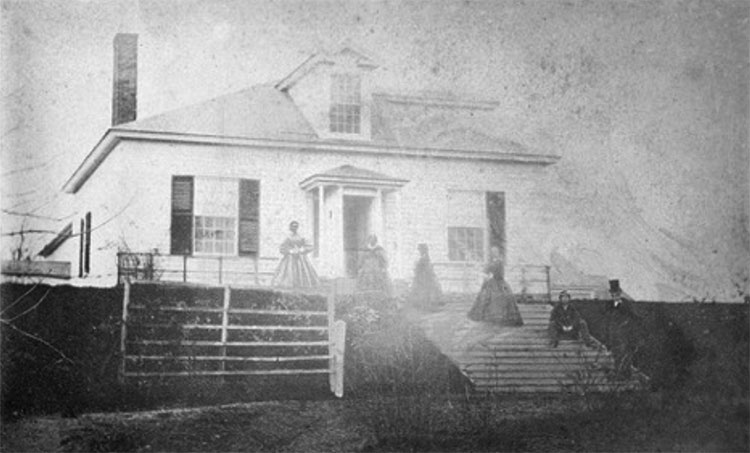 Is this the house at 101 King Street East or the house at 115 King Street East? Or is it some other house altogether? It doesn’t fit exactly the layout of either modern house; either would have required extensive remodeling to go from the one in the photo to the ones currently on either property. Both now have a covered porch on the front of the house. The placement of doors and windows, the shape of the dormer above the front door, and the stairway in front of the house are a much better fit to 101 King Street East. On the other hand, the shape of the roof is a much better match to 115. Also, there is a recessed part of the front wall at 115 King Street east on the east side of the building. Notice in the above photo that there is a section of house visible beyond the roofline in the right side of the photo, which might match this recess. There is no stairway in front of 115 King Street East, but there is certainly a slope and I don’t see why there couldn’t have been stairs there at one time.

I think the roofline is the most telling. 101 King Street East has a gable roof (sloping down in two directions from a ridgeline running the width of the house). 115 King Street East has a hipped roof (sloping down in all four directions from a much shorter ridgeline). The house in the above photo has a hipped roof, so unless the roof was completely replaced, it can’t be the house at 101 King Street East. Below is a photograph of “Chestnut Lawn”, the house at 101 King Street East, purportedly at the time George W. Webb lived there. Note the gable roof. George and Anna Webb owned this house from 1863 to 1887. Although the image below is of poor quality, you can see the man in the foreground is wearing a mid-thigh length frock coat with loose-fitting trousers. This was characteristic of the 1860’s and 1870’s, with the mismatched-coloured coat and pants being much more prevalent in the 1870’s (note the man in the stovepipe hat in the previous photograph, clearly from around the 1860’s, has a dark coat and dark trousers). If the picture below was taken in the 1870’s, then the earlier photograph couldn’t be Chestnut Lawn unless the roof was replaced with one of a completely different style within only about 20 years of its original construction (1850 as per Argyris). Also, note in the 1870’s photo that there is no recessed bit of wall on the right side of the house. 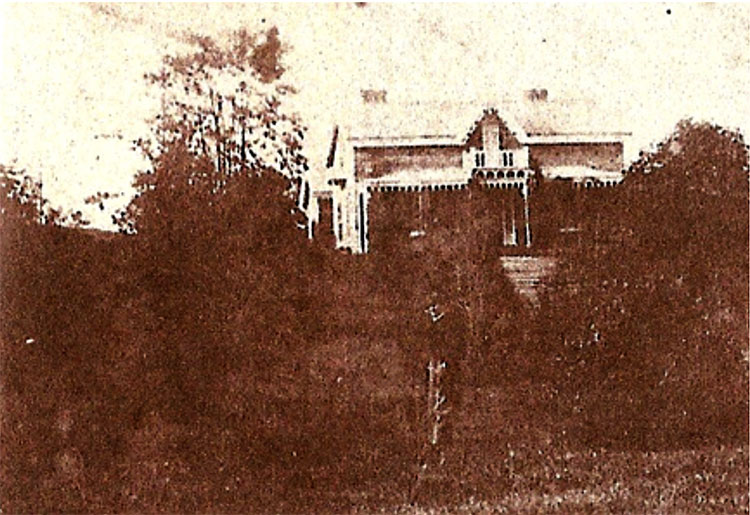 So the “Simmons House” in the Archives photograph looks like it is 115 King Street East, unless it is some other house entirely. If that’s true, I have no idea where it was.

Have a close look at the two houses with these photos in hand and let me know what you think.