101 King Street East on the main street of the village of Colborne is known as “Chestnut Lawn” locally. It sits majestically on a hill, with a broad sweep of lawn down to the old Kingston York Road (today Highway No. 2), which gives it great presence. And it is virtually next door to Seaton Hall, another of Colborne’s gracious century homes. Chestnut Lawn is occupied by the third generation of the same family, all of whom have done a most credible job maintaining its beauty and integrity over the years.

Chestnut Lawn is clad in the red brick common to Northumberland County and is a classic one and a half or two) story Gothic revival cottage.

It has a steep central gable in the half story, which has a petite balcony, very fancy bargeboard and a large finial. It is three bay with a gable roof, two full length multi-pane windows and a double round head door at the head of the steep wooden entry stairs which feature decorative cut outs. The full length porch with its elaborate bargeboard is a real feature of this property.

Chestnut Lawn has a peak roof and two massive chimneys.

There is a very long, single story board and batten “tail” with an overhanging porch offering shelter for the side door. This “tail” significantly augments the square footage of the property.

The majority of the windows are multi pane, some six over six and at least one window is two over two.

There is an old stone well and pump just outside the back door and
there are various outbuildings in the rear of the property which cannot be seen from the road.

101 King Street East is one of the premiere properties in the village.

Chestnut Lawn was built about 1850 by J.D. Goslee, a lumber merchant, who was the uncle of Elizabeth Goslee Grover who built Seaton Hall with her husband. J.D. Goslee was a very important person in 1850s Cramahe, witness the fact that he generously donated land and materials to build the Trinity Anglican Church in Colborne in 1843. The occupants of Chestnut Lawn today, are the third generation to live there and they advise that their outbuildings once housed a cooperage and apple packing business.

The earliest land ownership records for the southern part of Lot 30, Concession 2 are a bit confused. The Lot was granted by the Crown to King’s College on 3 January 1828. Scattered parts of it were then sold by James D. Goslee (1794-1865) (LINK) in 1846, 1847, and 1848, although no record has been found of a transfer from the College to Goslee. It might be assumed that this was simply a case of a missing Land Office record if it weren’t for the fact that all of the southern part of Lot 30, including the parts sold by James D. Goslee, were sold by King’s College (by then the University of Toronto) to James’ son George Goslee (1823-1882) on 28 September 1855. Apparently the University didn’t recognize the right of James Goslee to sell off property, although ownership titles to the properties sold by him were apparently valid after the 1855 sale to George (probably because George honoured his father’s commitments). Although there is no Land Office record of James Goslee acquiring the properties he sold in 1846-1848, there is a comment in a later document pertaining to some legal difficulties he had that he had acquired at least some of those properties from Joseph Keeler. There is a Land Office record of an “assignment of lease” from Moses Hinman (1784-1872) to Joseph Keeler in April 1810. It rather looks like Hinman rented the property from the Crown and transferred his lease to Keeler, who then passed it on to James Goslee. Either Hinman, Keeler, or Goslee, it is uncertain which, took upon himself the rights of ownership, even though they didn’t legally exist.

On 3 February 1863 George Goslee sold Reid Block F, including the property now called 101 King Street East, to John McMurrich (1804-1883). McMurrich was never a resident of Colborne: he was a resident of Toronto from 1833 until his death. Originally a dry-goods merchant, he was a member of the Legislative Council of Upper Canada and later of the Legislative Council of Ontario from 1862 to 1871.

James McGlennon died of heart failure in 1915. Shortly before her own death in 1920 of “acute indigestion”, Annie McGlennon transferred the property at 101 King Street east to her second-youngest son, Archibald Campbell McGlennon, a physician, on 26 June 1918. He was married to Isabel H. Bryce (1896-1971).

“How Firm A Foundation” (Argyris 2000) refers to this house as “Chestnut Lawn” and states that the house was built around 1850 by James and George Goslee. James Goslee lived in a house on the far side of Seaton Hall from Chestnut Lawn. His daughter Elizabeth and her husband John M. Grover lived in Seaton Hall. Perhaps George Goslee lived at Chestnut Lawn? Certainly the Webbs lived there. Here is a photograph from around the 1870’s, judging from the clothing worn by the man in the foreground, who is purported to be George Webb. 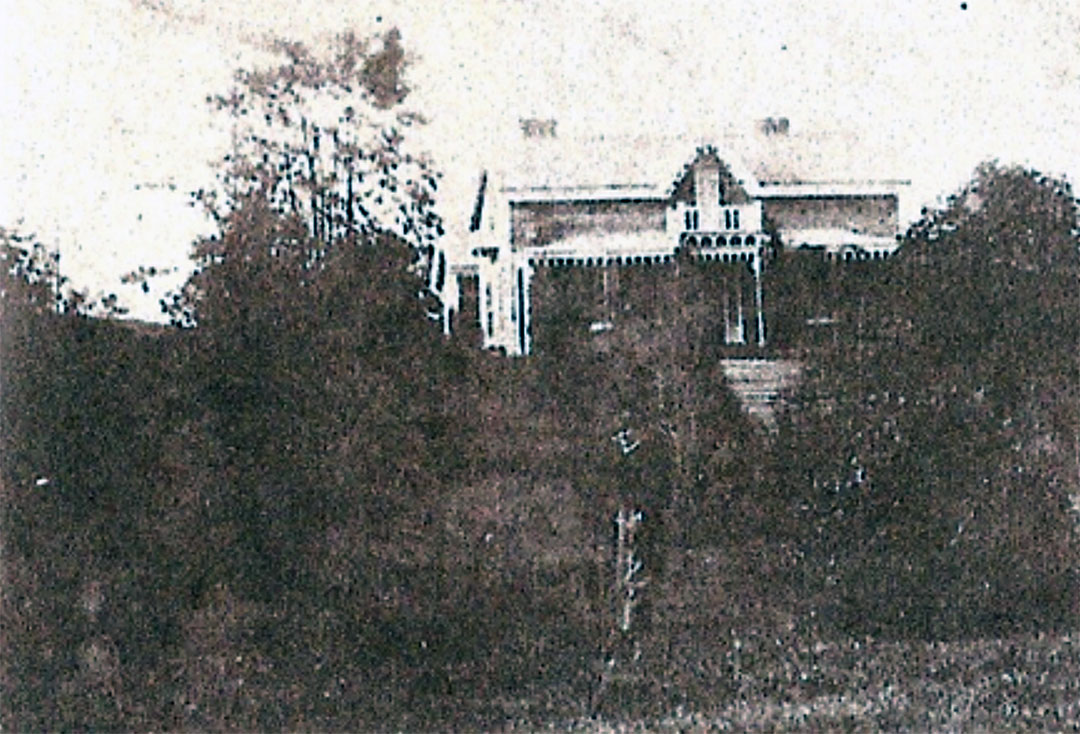 Similarly, the McGlennons clearly lived there as well. Their descendants still do (or at least did as of the publication of “How Firm a Foundation”.