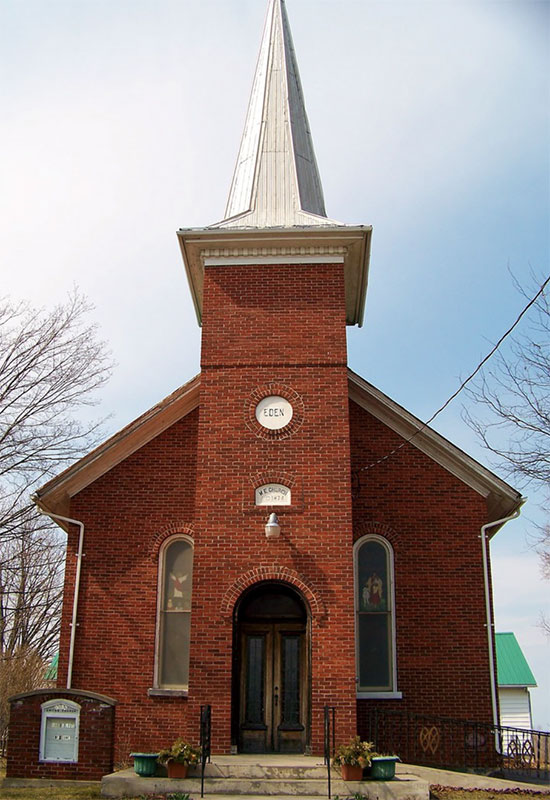 The following text is a verbatim rendition of the Centennial Anniversary program for the Dundonald Church, issued in 1974. It is reproduced here for a rare glimpse into the political, financial and social issues facing the rural Methodist community over a century.

Turing back the pages of history 100 years, at the centenary, we discover that the community in which the church was founded was known as “Dudley’s Neighbourhood”, and Dundonald was located a short distance to the East. Some time later, when the general store and post office of Dundonald became relocated in Dudley’s Neighbourhood, it became known as “New Dundonald”. Subsequently the whole area became known as Dundonald again.

The land on which the church was built was purchased from Thomas G. Murphy and his wife, Martha S. Murphy, for the total sum of one dollar. Austin Dudley, William Walker, Schuyler Tompkins and Almond Drinkwater, who were appointed trustees of the Methodist episcopal Church, acted as purchasing agents. The grant is dated June 13, 1874, and was registered on august 11, 1874 at 10 a.m.

It was here at this site that the first sod was turned and cornerstone laid for what we know today as Eden United Church. The exact date of this ceremony is not known. According to available records, the church was not completed util 1876 – two years seeming to be a reasonable length of time for construction.

“The Church, affiliated with the Colborne circuit was dedicated in 1876 as a Methodist Episcopal Church as the plaque on the front of the church testifies. The Canadian Christian Advocate of June 21, 1876 contains the following announcement “the new M.E. Church in what is called Dudley’s Neighbourhood, 5th concession of Cramahe, will be open for Divine Service on Thursday June 29th, 1876. Dedicatory ceremonies at 10 a.m. and at 10:30, preaching by Rev. Bishop Carman. Dinner will be served in the new hall adjoining the church from 3:00 to 5:00 p.m. In the evening, Rev. J.R. Jaques, D.D., President of Albert College, Belleville, will deliver his popular lecture entitled, “The Two Lamps, or the Philosophy of Education”. Lecture to commence at 7:30.p.m. Tickets for dinner and lecture, 50 cents each. A very cordial invitation is given to all former pastors and the people generally. This may not be the largest, but it is claimed to be the prettiest church on the Colborne Circuit. In style and finish it is a model. Come and see it.”

Apparently, Church services must have been held prior to the erection of the church as former pastors were invited to the opening and records received from the United Church Archives indicate givings for Dudley’s Charge as far back as 1870. A later edition of the same publication mentioned previously contains this description of the Church and account of the opening:

“The Church is a handsome brick structure, 30 x 48 feet, with a tower 40, surmounted by a spire over 30 feet high. Space would not allow a full description. Suffice it to say that everyone we heard speak of it declared it to be, both in design and finish, a model of neatness and the finest country church they ever saw. We might notice such names as the Dudleys, Tompkins, McDonalds, and in fact all engaged in this enterprise as deserving great credit. The Methodist Choir of Colborne did good service on Thursday and our own church choir on the Sabbath.”

The Church hall, referred to in the first quotation, was constructed at the same time. Sheds were built underneath the main hall so that horses could be tied up, fed and watered while their owners attended services.

In 1884, the Methodist Episcopal Church was united with the Bible Christian Church, the Primitive Methodist Church and the Canada Methodist Church (formerly Wesleyan and New Connexion, unites in 1874) to form what we refer to as the methodist Church. It was this organization which entered union in 1925.

A Wesleyan or Canada Methodist Church known as “Providence” was located in the vicinity of walker’s Cemetery, approximately one and one half miles to the West. this church was sold in 1855, one year following the Methodist union, so in all likelihood, members of this church also came to Eden.

This Salem Circuit remained intact until 1924, when it was dismantled in preparation for the formation of the United Church of Canada in 1925. At this time, Eden joined Hilton Pastoral Charge and Salem was reattached to Colborne. Hilton Pastoral Charge, consisting of the Churches at Sharon, Hilton, Shiloh and Eden, were served by one minister who resided in the manse provided for him at Hilton.

Following the establishment of the United Church of Canada and the Hilton Pastoral Charge, everything seemed to run smoothly for a number of years as Church records contain only the annual reports of the various Church organizations such as the W.A. (Women’s Association), Y.P.U. (Young People’s Union), Sunday School and “Busy Pals” (a teen-age girls’ group of the 1940s) and business arising from the normal problems encountered in the operation and maintenance of the Church.

During the 1950’s, the church experienced a period of unrest. It seemed difficult to satisfy the needs of four congregations with all four having financial problems. In an attempt to remedy the financial situation, student ministers were hired for a few years, but the churches soon felt the need for a full time minister. An effort was made to support an ordained man for a short time, but with ministers becoming increasingly difficult to obtain, the Churches finally chose a full time lay supply.

By this time, the possibility of the realignment of Hilton Pastoral Charge was being discussed. In 1965, this alignment became a reality with the following result: Hilton became associated with Brighton Charge (the Church was later closed, sold and demolished); Shiloh Church was closed, but chose to become a “Memorial Church”, having an annual service; Sharon Church was closed, sold and demolished; and Eden Church once again, as in the beginning, became a point on Colborne Pastoral Charge. When this plan was first introduced, a lay speaker assisted the Colborne minister by conducting weekly services at 11:00 a.m. However, in 1968, the Colborne minister assumed the entire duties and services were held at 9:30 a.m. on alternate Sundays with Salem. This enables Colborne to have weekly services at 11:00 a.m. This arrangement has proven t be most successful and remains in effect today (1974) Sunday school is held every week in the Church Hall.

The building itself has endured the elements well and today remains a very well preserved and solid structure. Sturdily constructed of brick, without a basement, it has undergone very few alterations. With the exception of the removal of the thirty foot steeple approximately fifty years ago (1924), the addition of a cement step to replace the original wooden one and a change of front doors, the exterior remains as it was 100 years ago.

The interior also remains basically unchanged It has been redecorated several times, the last time in 1973, when in addition to the normal painting and varnishing, the vestibule was panelled, the pulpit and alter were refinished and new carpeting was laid. Modernization has included the installation of electric lights in 1945 at a cost of $77.30, the lowering and tiling of the ceiling in 1966 (due to the collapse of the original plaster), and the replacement of the two antiquated wood burning box stoves by an oil furnace in 1973. Many memorial gifts presented to the Church have also served to enhance its interior beauty.

This year (1974), we are celebrating the Centennial Anniversary of Eden, United Church. We, the present generation, owe a debt of gratitude to our forefathers for the establishment of this church in our community. For one hundred years it has contributed to the advancement of Christianity, not only here in our community, but in our country as well. Today the Church is regarded not only as a place of worship but the “nucleus of the neighbourhood and the “hub” around which our rural life revolves.

As we observe this memorial occasion, let us look to the future as well as recall the past – at no other time in history has society been experiencing change as rapidly as during this decade and the Church must keep pace. We, therefore, trust that the faith and courage which inspired the erection of this Church one century ago and the service and devotion which supported it these many years, will continue to sustain “this little country church” for many years to come.